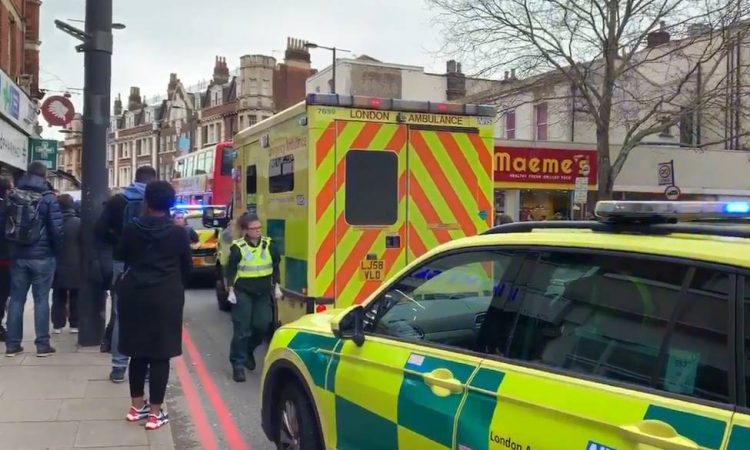 British police on Sunday shot dead a man in south London, after at least two people were stabbed in a “terrorist-related” incident.

An eye-witness described seeing a man “with a machete and silver canisters on his chest” fleeing from police before they opened fire.

The shooting, on a busy street packed with Sunday shoppers, came just over two months after a convicted terrorist was shot dead by police on London Bridge, after he killed two people.

The Metropolitan Police said the man died at around 2:00 pm (1400 GMT) on Streatham High Road, a busy thoroughfare lined with shops in a residential neighbourhood.

Prime Minister Boris Johnson thanked the emergency services for their response. “My thoughts are with the injured and all those affected,” he said,

Interior Minister Priti Patel paid tribute to the bravery of police and emergency services and said she was being kept updated.

London Mayor Sadiq Khan said in a statement: “Terrorists seek to divide us and to destroy our way of life — here in London we will never let them succeed.”

An AFP reporter at the scene said the high street was blocked off with police tape, with buses backed up outside the cordon, as uniformed police officers kept the public away.

The Met added it believed there were two victims injured in the incident, and was awaiting an update on their conditions.

London Ambulance Service said it was “treating a number of patients at the scene”.

“The circumstances are being assessed; the incident has been declared as terrorist-related,” the police force said on Twitter.

“We can confirm that the man shot by police at around 2pm today in #Streatham High Road has been pronounced dead.

“We believe there are two injured victims. We await updates on their conditions.”

“I saw a man with a machete and silver canisters on his chest being chased by what I assume was an undercover police officer — as they were in civilian clothing,” he said.

“The man was then shot. I think I heard three gun shots but I can’t quite remember.”

Bulhan added he then sheltered in a library as other passers-by ran into nearby stores.

The force urged people to avoid the area while the emergency services were responding.

Unverified footage posted to social media purporting to capture some of the incident showed armed police officers surrounding a man lying on the ground on Streatham High Road.

They then abruptly moved away, urging onlookers to move back, as other emergency vehicles arrived at the scene.

One eye-witness who gave first aid to one of the victims told LBC radio he heard what he thought was a car backfiring, then two, possibly three armed police officers.

“I didn’t realise at the time I would be swept up in a terrorist incident. I thought this was someone who had shoplifted or people larking around,” he added.

He used a blanket on one of the injured victims as a compress on their wounds, while first-aid equipment was brought from a nearby pharmacy, he said.

Britain has seen a spate of terrorist attacks in recent years.

In the most recent incident on November 29, 2019, convicted terrorist Usman Khan killed two people before being shot dead by police on London Bridge.