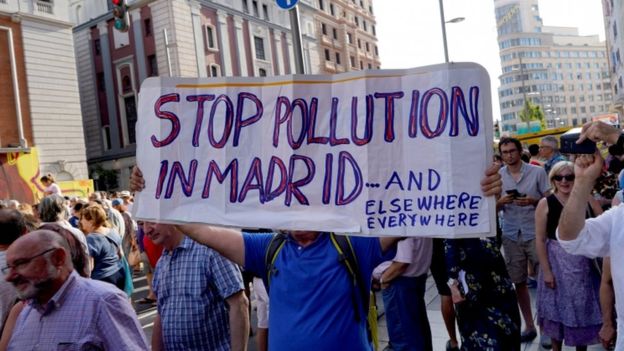 Thousands of protesters flooded the streets of Madrid on Saturday to oppose the newly elected conservative mayor’s decision to reverse car pollution restrictions.

The People’s Party-run city hall has provoked an outcry by suspending a ban on most petrol and diesel cars in Madrid’s centre.

The new mayor has been backed by other parties, including centrist Ciudadanos and the far-right VOX. They oppose the plan, known as “Madrid Central”.

In heatwave conditions, demonstrators thronged the streets of the Spanish capital on Saturday, calling on the mayor to reinstate the ban.

Some protesters chanted, “yes we can, I do want Madrid central”. Others waved placards and banners, including one containing the message “I want to breathe free”.

Mariano Sánchez Bayle, a retired paediatrician, told Spanish newspaper El País he was marching to “defend the population” from pollution.

“We have to save [the planet] starting at the local and small level, the first thing is Madrid’s centre,” actress Laura Martin, 39, told Reuters news agency.

Madrid’s scheme mirrored those of other European cities such as London, Stockholm and Milan, whose governments are ramping up anti-pollution efforts as evidence of the harmful effects of vehicle emissions grows.

Under the plan, certain petrol and diesel cars were prohibited from entering a restricted area of around five sq km (two sq miles). Drivers were fined €90 (£80) if they did so.

A report by Ecologists in Action found that in May levels of nitrogen dioxide – a pollutant emitted by vehicles – reached the lowest level since records began in 2010.

But despite the reported success of the scheme, Mr Martínez-Almeida vowed to reverse the restrictions after his election win.

From 1 July, the restrictions will be lifted while Mr Martínez-Almeida’s government reviews the plan to make it “compatible with citizens’ mobility needs”.

The European Commission has warned Madrid it faces sanctions if it fails to meet air quality standards.