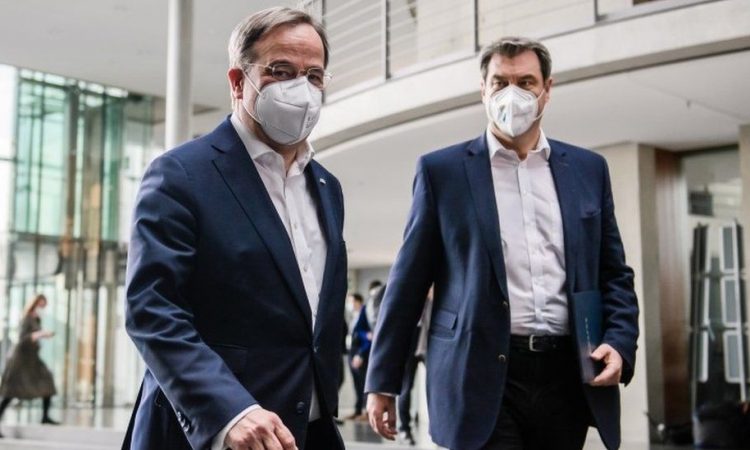 The race to replace German Chancellor Angela Merkel is heating up after both leaders of the two parties that make up her conservative alliance put themselves forwards.

Mrs Merkel, leader since 2005, is set to stand down at September’s election.

Markus Söder, who is Bavaria’s premier, said on Sunday he was prepared to be the candidate if he had the support of the conservatives elsewhere in Germany.

His rival is Armin Laschet who had already said he would stand.

Mr Söder’s announcement came as the two conservative parties, who work together in federal politics, met on Sunday for talks on the issue. A decision on the CDU/CSU joint nominee is expected soon.

Speaking at a joint news conference, Mr Laschet, 60, said: “Markus Söder and I had a long conversation before today. We declared our willingness to run for the chancellorship.”

Mr Söder, 54, said they were both suited for the role and willing to take it up.

“What is important is that we do this with respect for each other. And I will say this: whoever is chosen in the end we will both work very well together.

More commonly a leader of the CDU, the larger party, would be expected to become the two parties’ candidate. But at present, polls suggest Mr Söder would be the more electable choice.

A candidate from the Bavarian sister party has never won the federal election before. Two previous attempts by CSU leaders failed in 1980 and 2002.

Mrs Merkel has not publicly expressed a preference for either potential candidate.

The conservative alliance is facing a decline in popularity following the coronavirus pandemic, slipping to about 27% in polls.

So far Mr Söder has proved popular in the crisis, even though Bavaria’s Covid figures are no better than those of most other German states.

The Social Democrats have already announced their candidate for chancellor, Finance Minister Olaf Scholz, while the Green party will announce their nominee next week.