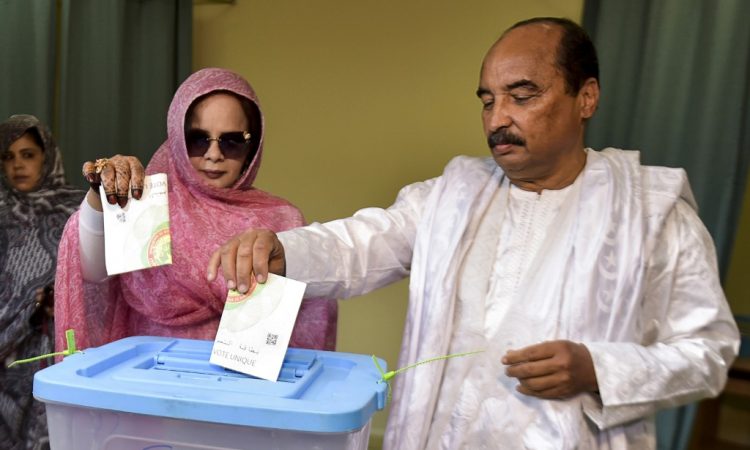 Mauritanian President Mohamed Ould Abdel Aziz (R) casts his ballot next to his wife Tekber Mint Melainine Ould Ahmed (L), on June 22, 2019, at a polling station in Nouakchoot during the presidential election. - Voters in the West African state of Mauritania went to the polls on June 22, 2019 after a campaign dominated by the country's economy and appeals to preserve its hard-won stability. The ballot is the first in the nation's coup-strewn history that looks set to see an elected president complete his mandate and hand over to an elected successor. (Photo by SIA KAMBOU / AFP)
232views

Mauritania is heading to the polls in what may result in the first democratic transition of power since the West African country achieved independence in 1960.

President Mohamed Ould Abdel Aziz seized power in a coup in 2008, but has agreed to step down and abide by a two-term limit of office.

More than a million people are eligible to vote in Saturday’s election.

Six candidates are competing for the presidency.

Opposition candidates are also taking part in a move seen as a positive step forward, after boycotting several previous polls.

The country’s electoral commission has promised a free and fair election, despite claims by the opposition that it is biased in favour of the governing party.

Mauritania’s press authority said on Friday that it had received no complaints about the coverage of the campaign.

The most critical issue on the campaign trail has been the standard of living, which every candidate has promised to improve.

Slavery also remains an issue. Mauritania became the final country in the world to formally abolish slavery in 1981, but it continues to this day. Criminal laws allowing slaveholders to be prosecuted were passed in 2007, but have yet to be fully and effectively enforced.

After Mauritania achieved independence from France in 1960, the country’s first president held power for 18 years before being ousted in a military coup. More coups followed in 1984, 2005, and in 2008.

If Saturday’s election ends with no clear winner, a run-off election is due to be held on 6 July.