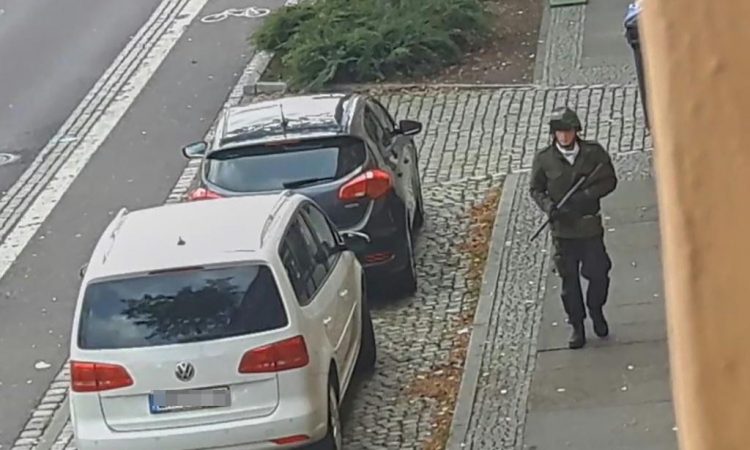 Chancellor Angela Merkel vowed Thursday there would be “zero tolerance” for hate in Germany after an attempted massacre at a synagogue, as Jews demanded action to protect the community from the rising threat of neo-Nazi violence.

Two people were shot dead in the eastern German city of Halle on Wednesday, with a synagogue the prime target. The suspect, 27-year-old German Stephan Balliet, filmed the assault and streamed it online.

The victims, reportedly a German man and woman, appeared to be chosen at random when the assailant failed to gain access to the temple he had besieged with gunfire and homemade explosives, as the frightened congregation barricaded itself inside.

The rampage was streamed live for 35 minutes on Twitch, and eventually seen by some 2,200 people, the online platform said, in a chilling reminder of the mosque attack in Christchurch, New Zealand in March which was also played out online in real-time.

Police subsequently captured the Halle suspect after a gun battle that left him wounded.

Merkel told a trade union convention that the German state and civil society must do everything in their power to stand up to “hate, violence and contempt for human life”.

“There must be zero tolerance,” she said.

He later told reporters that the country had a duty to protect Jews on its soil, also in light of its historical guilt for the Holocaust.

“It must be clear that the state takes responsibility for Jewish life, for the security of Jewish life in Germany,” he said.

Federal prosecutor Peter Frank said Balliet would be charged with two counts of murder and nine counts of attempted murder in what he called a “terror” act that had been planned to be a “massacre”.

Balliet had packed four kilogrammes (nine pounds) of explosives in his car, and “wanted to enter the synagogue to kill many people,” added Frank.