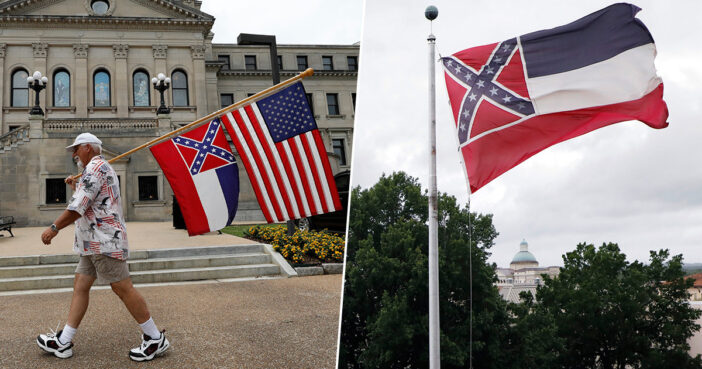 Politicians in the US state of Mississippi have taken a major step towards removing the Confederate emblem from the state flag.

On Saturday, both chambers of the Republican-led state congress voted to begin the process of changing the flag.

Mississippi is the last state in the US to feature the emblem on its flag.

The Confederate emblem is viewed by many as a racist symbol, with recent protests over the death of George Floyd reigniting debate over its use.

The flag was originally used by the slave-owning states who lost the US Civil War (1861-65).

The vote passed in both chambers of the Mississippi legislature: in the House of Representatives by a margin of 84-35, and then in the Senate by 36-14.

It means a bill to change the state flag can now be formally introduced. It is expected to be proposed on Sunday when the state congress is back in session, US media report.

A two-thirds majority was needed to begin the process. This was viewed as the biggest test because only a simple majority is needed to pass the final bill.

And in a major boost to the movement for change, Republican Governor Tate Reeves said that he would sign a bill to do so if it was approved in congress.

He had previously said that he would not veto a bill, but did not publicly back it.

“The argument over the 1894 flag has become as divisive as the flag itself and it’s time to end it,” he wrote on Twitter.

He added: “We should not be under any illusion that a vote in the Capitol is the end of what must be done – the job before us is to bring the state together.”

“I would never have thought that I would see the flag come down in my lifetime,” Democrat Barbara Blackmon, who is African-American, said on Saturday.

If the bill passes, a commission will design a new flag, to be be voted on in November.

Hundreds of statues dedicated to the Confederacy – the southern states which revolted against the US government – exist all throughout the US, and often serve as an reminder of the history of slavery and racial oppression in the US.

But the depth of feeling that followed the death of George Floyd has led to renewed demands for an end to institutional racism. In the US and other countries statues of controversial historical figures have either been pulled down or taken down.