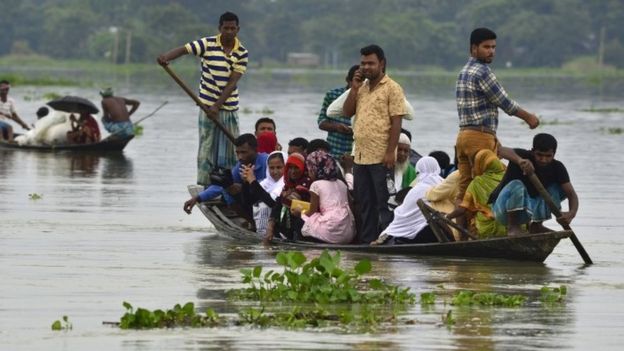 Dozens of people have been killed as monsoon floods rip through Nepal, Bangladesh and north-eastern India.

At least 47 people have lost their lives in Nepal as torrential rains hit the region, the government said in a statement.

Twenty-nine people are reported missing amid floods and landslides, while 28 have been injured.

More than a million people have been affected by rising floodwaters as part of the seasonal monsoon.

Heavy rains are expected to continue in the coming days.

Police have rescued more than 1,100 people from across Nepal, affecting some 10,385 households.

A family of three was killed when part of their house collapsed in the capital, Kathmandu.

Bangladesh’s Cox’s Bazar – where more than a million Rohingya refugees are encamped after fleeing a military crackdown in Myanmar – has been hit by at least 58.5 centimetres of rain this month, according to the country’s meteorological department.