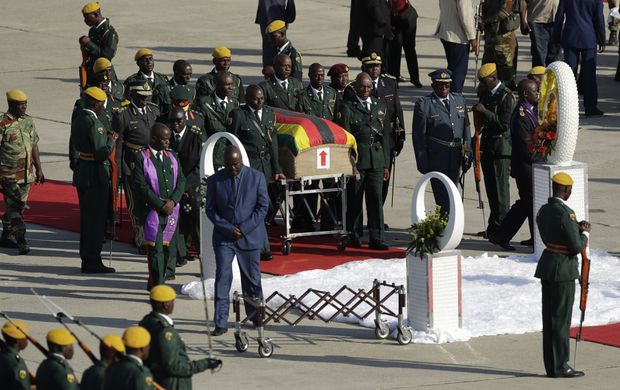 The body of Zimbabwe’s ex-president, Robert Mugabe, arrived home on Wednesday for burial in a country divided over the legacy of a former liberation hero whose 37-year rule was marked by repression and economic ruin.

Mugabe, a guerrilla leader who rose to power after Zimbabwe’s independence from Britain and governed until he was ousted by the military in 2017, died on Friday in Singapore, aged 95.

His health deteriorated after he was toppled by the army and former loyalists in November 2017, ending an increasingly iron-fisted rule during which he crushed his opponents.

Around two thousand supporters, family members and government officials were on the tarmac at Harare airport to welcome Mugabe’s remains as they arrived by charter flight from Singapore, an AFP reporter at the scene said.

Soldiers stood guard along a red carpet as military officers walked solemnly with the coffin drapped in the green, gold, black and red national flag.

Mugabe died on a medical trip to Singapore, where he had been travelling regularly for treatment. A delegation including Vice President Kembo Mohadi headed to the affluent city-state on a chartered flight to bring him home.

The body will be taken to Mugabe’s private Harare residence, known as the Blue Roof, for the night. It will be laid out for the public to pay their respects in Rufaro stadium on Thursday, before heading to his homestead Zvimba.