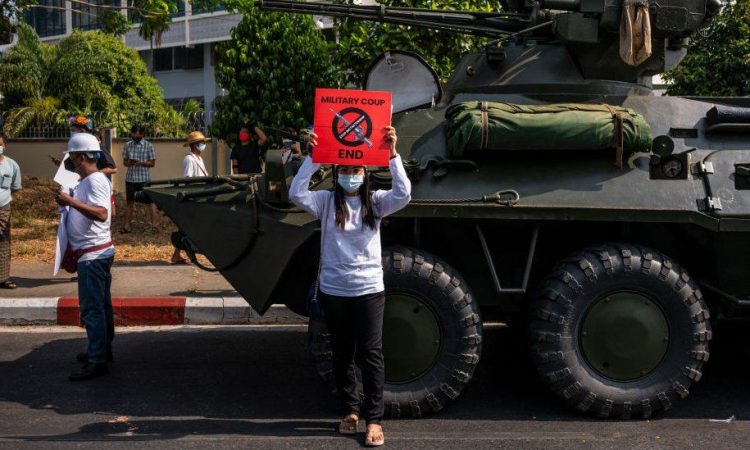 Myanmar’s military has warned anti-coup protesters across the country that they could face up to 20 years in prison if they obstruct the armed forces.

Long sentences and fines will also apply to those found to incite “hatred or contempt” towards the coup leaders, the military said.

The legal changes were announced as armoured vehicles appeared on the streets of several cities.

Hundreds of thousands of people have taken part in protests in recent days.

The demonstrators are demanding the release from detention of their elected leaders, including Aung San Suu Kyi, and the restoration of democracy in Myanmar, also known as Burma.

On Monday, Ms Suu Kyi’s lawyer said she would be detained for a further two days. She will then be tried via video link at a court in the capital Nay Pyi Taw on Wednesday, Khin Maung Zaw added.

Ms Suu Kyi was rounded up with other members of the government on 1 February, but her detention was due to end on 15 February, according to Reuters news agency.

The charges against her include possession of unlawful communication devices – walkie-talkies used by her security staff.

Her party was elected in a resounding victory last November, but the military has alleged voter fraud without providing proof.

The military’s heightened presence is the latest sign of a potential crackdown on opposition to the coup. At many strategic locations, soldiers have replaced the police.

In the main city, Yangon, eight-wheeled armoured vehicles have been seen trying to navigate the rush-hour traffic, sometimes surrounded by cars honking their opposition to the coup.

The ruling junta has also announced a series of legal changes, imposing long prison sentences and fines on anyone found to incite hatred towards the military, “by words, either spoken or written, or by signs, or by visible representation”.

In a statement posted on a military website on Monday, it said that people preventing the security forces from carrying out their duties could face 20 years in prison, while those found to stir up fear or unrest in public could be imprisoned for terms of three to seven years.

News of the legal threats came hours after the internet was restored following an overnight shutdown from Sunday into Monday.

As demonstrators gathered in the central city of Mandalay again on Monday, there were reports of security forces firing rubber bullets to disperse crowds.

In footage posted on social media, the sound of what appears to be gunshots can be heard as crowds flee, with several people later appearing to display injuries.

Police in the city were also reported to have used sling-shots against protesters and were met with volleys of bricks.

A leading student activist who has gone into hiding, Myo Ko Ko, told the BBC why he and others were willing to risk their lives.

“We strongly believe in democracy and human rights. We know that it’s risky,” he said.

“I have to move to another place day by day because of being searched (for) by police. We hope the international community will help us.”

In the city of Myitkyina, in Kachin state, shooting could also be heard as security forces clashed with anti-coup demonstrators. It was not clear whether rubber bullets or live rounds were fired.

Meanwhile, monks and engineers led a rally in Yangon. Protests focused on the central bank building, the US and Chinese embassies, and the city headquarters of Ms Su Kyi’s National League for Democracy.

A doctor at a hospital in Nay Pyi Taw told the BBC the security forces were carrying out night-time raids on homes.

“I’m still worrying because they [made] a curfew statement… not to go outside between 20:00 and 04:00, but this makes a time for the police and soldiers to arrest people like us,” said the doctor, who cannot be named for safety reasons.

“The previous day they [broke] into the house, cut down the fence, entered and arrested people unlawfully. That’s why I’m also worrying.”

Residents in several cities are reported to have formed night-watch groups to deter mobs rumoured to have been dispatched by the military to cause unrest.

Thousands of prisoners have been been given amnesty. Though this is normal to deal with prison overcrowding, there are fears that the military will use some of those released to exert pressure on anyone opposing the regime.