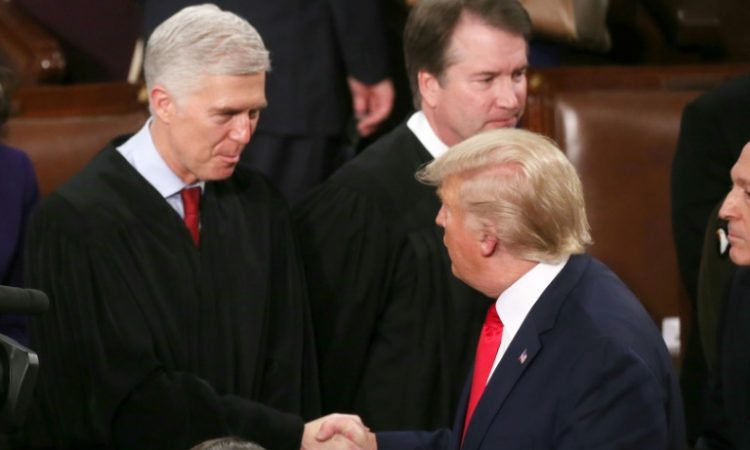 US Supreme Court Justice Neil Gorsuch, the unexpected author of a landmark ruling to protect LGBT workers, was appointed by President Donald Trump to be a reliably conservative voice on the nation’s highest court.

Until Monday, the 52-year-old Gorsuch had largely lived up to his billing, siding with the conservative majority on most legal questions.

Trump has frequently touted the right-leaning credentials of Gorsuch and his other Supreme Court appointee, Brett Kavanaugh, as reasons to vote for his re-election in November.

That argument suffered a blow on Monday when Gorsuch and Chief Justice John Roberts sided with the court’s four liberal judges to rule that employers cannot discriminate against workers because of their sexual orientation.

The court’s historic ruling was welcomed by gay and transgender rights advocates, but condemned by some right-wing groups who saw it as a betrayal by Gorsuch.

Gorsuch’s judicial philosophy is motivated by textualism — interpreting the law in accordance with its plain text — and this approach fueled his ruling in the LGBT rights case.

Title VII of the Civil Rights Act of 1964 outlaws discrimination because of a person’s sex, and Gorsuch interpreted this as also covering sexual orientation.

“An employer who fires an individual for being homosexual or transgender fires that person for traits or actions it would not have questioned in members of a different sex,” he wrote. “Sex plays a necessary and undisguisable role in the decision, exactly what Title VII forbids.

“Those who adopted the Civil Rights Act might not have anticipated their work would lead to this particular result,” Gorsuch wrote. “But the limits of the drafters’ imagination supply no reason to ignore the law’s demands.”

Carrie Severino, president of the conservative Judicial Crisis Network, said Gorsuch had “bungled textualism so badly today for the sake of appealing to college campuses and editorial boards.”

The court was “short-circuiting the legislative process” and a decision in the matter should be left to Congress, Severino said.

A number of Republican lawmakers welcomed the ruling, however.

“I think it’s important that we recognize that all Americans have equal rights under our Constitution,” said Republican Senator Deb Fischer of Nebraska.

“The country’s obviously changed a lot on that issue,” he said.

Trump nominated Gorsuch to the Supreme Court to fill the vacancy left by the February 2016 death of conservative stalwart Antonin Scalia.

The Senate approved Gorsuch’s lifetime appointment to the Supreme Court by a 54-45 vote with three Democrats joining their Republican colleagues.

Trump had a fairly muted reaction to what he described as a “very powerful decision” in the LGBT case.

“Some people were surprised,” he said. “They’ve ruled and we live with their decision.”

Born in Colorado, Gorsuch moved to Washington when his mother was named director of the Environmental Protection Agency, the first woman to hold the post.

The tall, grey-haired and soft-spoken Gorsuch attended the exclusive Georgetown Preparatory School before going on to Columbia University.

He earned his law degree at Harvard, where he was a classmate of Obama.

Gorsuch met his British-born wife, Louise, while studying for a doctorate at the University of Oxford.

He was a law clerk for Supreme Court justices Byron White and Anthony Kennedy before spending 10 years in private practice.

He joined the Department of Justice in 2005 and was appointed an appeals court judge the next year by president George W. Bush.

Gorsuch has departed previously from his fellow conservatives on the Supreme Court, notably in a March 2019 case involving Native American rights in which he sided with the four liberal justices.

And while he remains an unabashed conservative, Gorsuch has suggested he would not hesitate to assert his independence.

“All judges wear black,” he said.