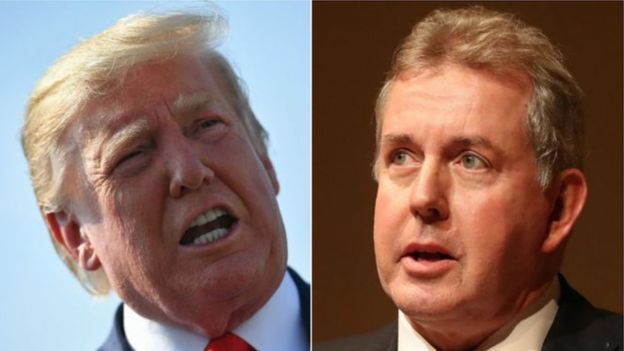 Donald Trump abandoned the Iran nuclear deal to spite Barack Obama, according to a leaked memo written by the UK’s former ambassador to the US.

Sir Kim Darroch described the move as an act of “diplomatic vandalism”, according to the Mail on Sunday.

It says the memo was written after the then Foreign Secretary Boris Johnson appealed to the US in 2018 to stick with the nuclear deal.

Under that agreement Iran agreed to limit its sensitive nuclear activities.

It would also allow in international inspectors in return for the lifting of crippling economic sanctions.

However, President Trump did not think that the deal went far enough.

The newspaper reports that after Mr Johnson returned to the UK from the US, Sir Kim wrote that President Trump appeared to be abandoning the nuclear deal for “personality reasons” because the pact had been agreed by his predecessor, Barack Obama.

The British ambassador is said to have highlighted splits amongst US presidential advisors and that the White House did not have a “day-to-day” strategy of what to do following withdrawal from the deal.

The paper reports that Sir Kim wrote a memo to Mr Johnson, saying: “The outcome illustrated the paradox of this White House: you got exceptional access, seeing everyone short of the president; but on the substance, the administration is set upon an act of diplomatic vandalism, seemingly for ideological and personality reasons – it was Obama’s deal.