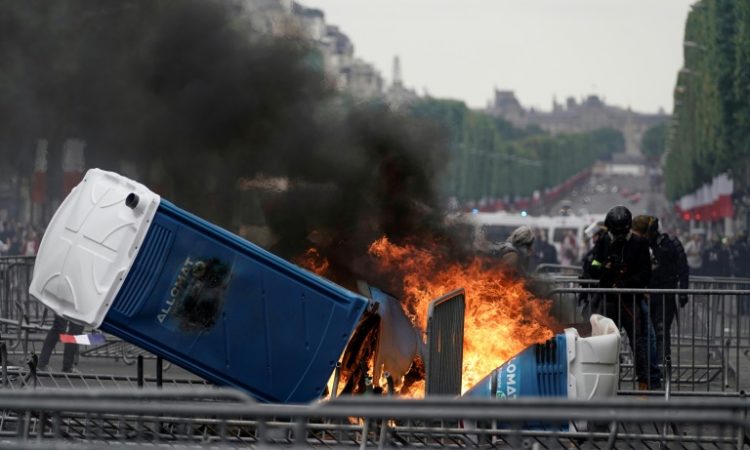 French President Emmanuel Macron on Sunday showcased European military cooperation in a Bastille Day parade but the aftermath of the glittering event was tarnished by violent clashes between police and protesters.

Key EU leaders, including German Chancellor Angela Merkel and Dutch Prime Minister Mark Rutte, joined Macron in Paris to watch the annual parade that included representatives of nine other European armies in a show of unity.

But the celebrations of France’s national day were followed by clashes that erupted between protesters and police that recalled violence seen at the peak of the “yellow vest” protest movement earlier this year.

Police fired tear gas to clear protesters from the Champs-Elysees, as spectators who had witnessed the parade and startled foreign tourists took cover.

The Paris police said in a statement that calm returned to the avenue following the police intervention, with a total of 175 people detained during the day.

The earlier parade itself had gone without a hitch. Some 4,300 members of the armed forces marched down the avenue’s famed cobblestones in a tradition that dates back to just after World War I.

But standing in an open-top command car alongside France’s chief of staff General Francois Lecointre, Macron was met with some jeers and whistles from supporters of the yellow vest movement.