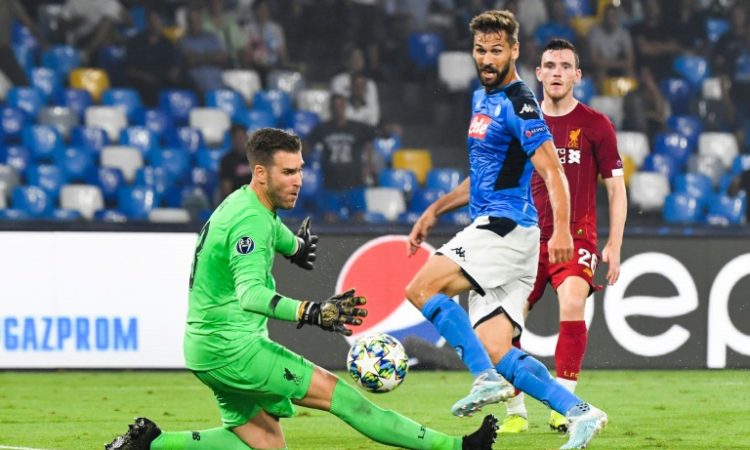 Holders Liverpool began their defence of the Champions League trophy with a defeat at the hands of Napoli on Tuesday, while one missed spot-kick condemned Chelsea to defeat against Valencia and another came to Barcelona’s rescue.

Liverpool survived a 1-0 defeat in Naples in the group stage last season to go on and win their sixth European Cup, and this time a 2-0 reverse at the San Paolo made them the first reigning champions to lose their opening game in the competition since 1994.

Both sides had chances but the Group E clash was edging towards a goalless conclusion until a late penalty award for the hosts. Barely 10 minutes remained when Jose Callejon went down under an Andy Robertson challenge and German referee Felix Brych pointed to the spot.

Dries Mertens beat Adrian from 12 yards and substitute Fernando Llorente — who played for Tottenham Hotspur against Liverpool in last season’s final — then took advantage of a rare defensive lapse by Virgil van Dijk to make it 2-0 in stoppage time.

Liverpool must now bounce back in two weeks when they host Austrian champions Salzburg, who made a stunning return to the group stage as teenage forward Erling Braut Haaland netted a hat-trick in a 6-2 demolition of Genk.

Salzburg had fallen in the qualifying rounds in each of the last seven campaigns but finally progressed this season to the group stage for the first time since 1994-95. Aged just 19 years and 58 days, Haaland is the third-youngest player to score a Champions League hat-trick behind Wayne Rooney and Raul, according to sports statisticians Opta.

The South Korean Hwang hee-Chan and Dominik Szoboszlai also scored before the break for Salzburg, while captain Andreas Ulmer completed the rout in the second half.

Jhon Lucumi and Tanzanian striker Mbwana Samatta were on target for the Belgian champions. Last season’s Europa League winners Chelsea ensured it was two defeats out of two on the night for English sides as they went down 1-0 at home to Valencia.

The Spaniards scored in the 74th minute when a Dani Parejo free-kick was converted by Rodrigo Moreno. Chelsea were then given a chance to rescue a draw when Daniel Wass was penalised for handball in the box, but Ross Barkley’s 87th-minute penalty hit the bar on its way over.