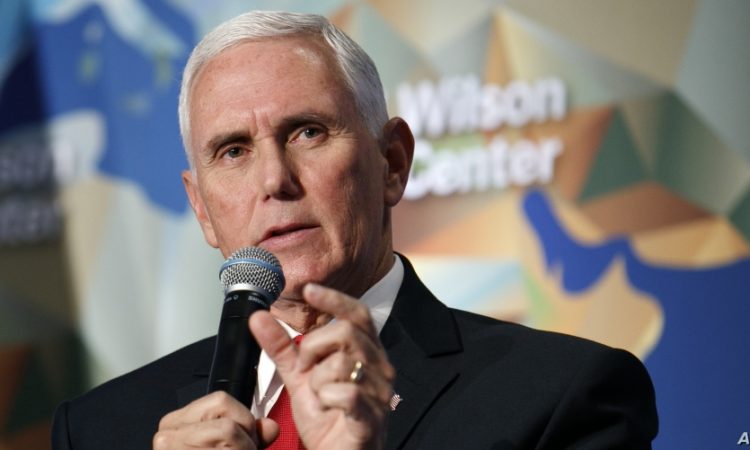 US Vice President Mike Pence on Thursday sharply denounced the NBA for not speaking out more forcefully on China as he vowed support for Hong Kong’s pro-democracy protesters.

In a wide-ranging speech on US-China relations, Pence lashed Beijing over its trading behavior, assertive military posture and treatment of religious minorities but also said the United States ultimately wanted a “constructive” relationship.

“The United States does not seek confrontation with China. We seek a level playing field, open markets, fair trade and a respect for our values,” he said at the Woodrow Wilson International Center for Scholars.

Pence reserved his strongest language for the National Basketball Association — whose players have often clashed at home with President Donald Trump — as he waded forcefully into a row over whether corporate America has sacrificed values in their search for profit in China.

“Some of the NBA’s biggest players and owners, who routinely exercise their freedom to criticize this country, lose their voices when it comes to the freedom and rights of other peoples,” Pence said.

“In siding with the Chinese Communist Party and silencing free speech, the NBA is acting like a wholly owned subsidiary of that authoritarian regime,” he said.

“Vice President Pence needs to shut the hell up,” Barkley said. “All American companies are doing business in China.”

Barkley complained of “holier than thou politicians” who “just because this thing happened they try to make the NBA and our players look bad. All American companies do business in China, period.”

Silver was more measured when asked his response to Pence’s comments, again going over the history of a controversy that erupted when Houston Rockets general manager Daryl Morey tweeted “Fight for freedom, stand with Hong Kong.”

Silver reiterated that an initial NBA statement on the matter was meant to indicate not that the league found Morey’s tweet “regrettable” but that it regretted the fact that it was sure to anger many Chinese fans.

Pence’s denunciation of players was likely a reference to Lakers superstar LeBron James, who took issue with Morey’s tweet on Hong Kong.

James has been a vocal critic of Trump, accusing the stridently anti-immigration leader of unleashing hate in the United States.

Pence also criticized footwear giant Nike for pulling Houston Rockets merchandise in China. Nike has a sponsorship deal with Colin Kaepernick, the American football quarterback who has been without an NFL job after refusing to stand for the national anthem in a protest against racism — protests that Trump criticized.

“Nike promotes itself as a so-called ‘social-justice champion,’ but when it comes to Hong Kong, it prefers checking its social conscience at the door,” Pence said.

Pence’s speech was billed as a follow-up to a hard-hitting address he gave a year earlier in which he accused China of improperly seeking to influence congressional elections to defeat Trump.