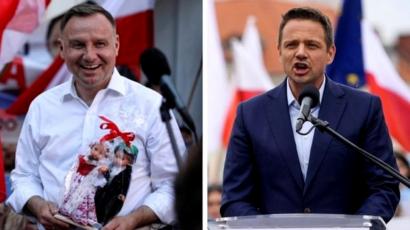 Poles vote on Sunday in a presidential ballot that could place significant curbs on the power of their nationalist government.

President Andrzej Duda is an ally of the ruling Law and Justice (PiS) party and if he loses, the opposition could force a big change in Polish politics.

His closest rival is the liberal, centre-right mayor of Warsaw, Rafal Trzaskowski.

Sunday’s vote is expected to go to a run-off in two weeks’ time.

The election is being watched closely across Europe, as Mr Duda’s allies in the Law and Justice Party (PiS) have frequently clashed with the EU over their controversial reforms to the judiciary and media.

When President Duda this month condemned the promotion of LGBT rights as an “ideology” more destructive than communism, European Commission Vice-President Vera Jourova said it was “really sad” when European politicians in high office “decide to target minorities for potential political gains”.

The president’s main rival has promised to repair ties with Brussels.

Poland’s president has the power of veto. If the next president were to use it, the governing party would not have the necessary majority in parliament to overturn it.

The governing party has had more success across the Atlantic, and last Wednesday Mr Duda became the first foreign leader to visit US President Donald Trump since the coronavirus pandemic.

“He’s doing a terrific job. The people of Poland think the world of him,” said President Trump, in what was widely seen as a domestic boost for Mr Duda. Mr Trump said it was the third time he had hosted the Polish leader and he thought Mr Duda would “be successful” in the presidential vote.

President Trump also promised the Polish leader that some of the thousands of US troops being moved out of Germany would be sent to Poland instead.

If Andrzej Duda gets 50% of the vote on Sunday, he will win – but he is unlikely to achieve that. If the mayor of Warsaw attracts as much support as the opinion polls suggest, then Mr Trzaskowski will take part in a run-off that is currently too close to call.

The Warsaw mayor has risen fast in the polls since joining the race in May. Previously a member of Donald Tusk’s Civic Platform government, Mr Trzaskowski won the capital’s race for mayor in 2018 promising “Warsaw for All”.

Mr Duda was originally an aide to ex-President Lech Kaczynski, the co-founder of Law and Justice who died in a plane crash. He is seen as a devout Catholic and signed pledges to prevent gay couples from marrying or adopting children.

There are nine other candidates in the race, including Szymon Holownia, presenter of TV show “I’ve got talent!” who is third in the polls. As a self-styled progressive Catholic, his voters will be key in any second round.