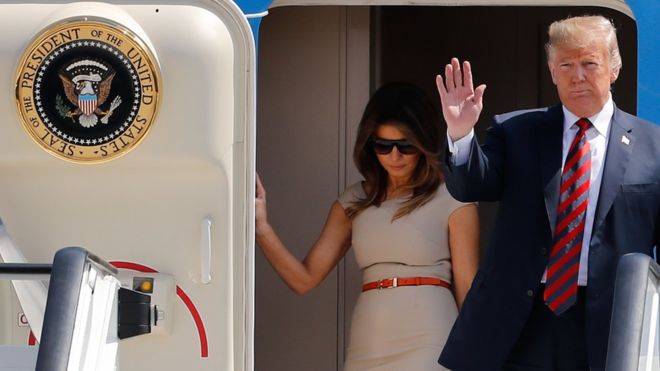 Air Force One is expected to land at London Stansted Airport at 09:00 BST.

The Queen will host a state banquet at Buckingham Palace on Monday evening for the President Trump and the First Lady Melania.

Protests are planned across the UK during the visit – including rallies in London, Manchester, Belfast, Birmingham and Nottingham.

On Monday, the president will be given a tour of Westminster Abbey and will also meet Prince Charles and the Duchess of Cornwall for tea at Clarence House.

At the state banquet, President Trump and the Queen will be joined by the Duke and Duchess of Cambridge.
Both the president and the Queen are expected to make a speech to guests, which will include prominent Americans living in Britain.

President Trump will be staying at the US Ambassador’s residence Winfield House, near Regent’s Park in central London.

On Tuesday morning, President Trump and Prime Minister Theresa May will host a business breakfast at St James’s Palace.

President Trump will then visit Downing Street for further talks with Mrs May, followed by a joint press conference.