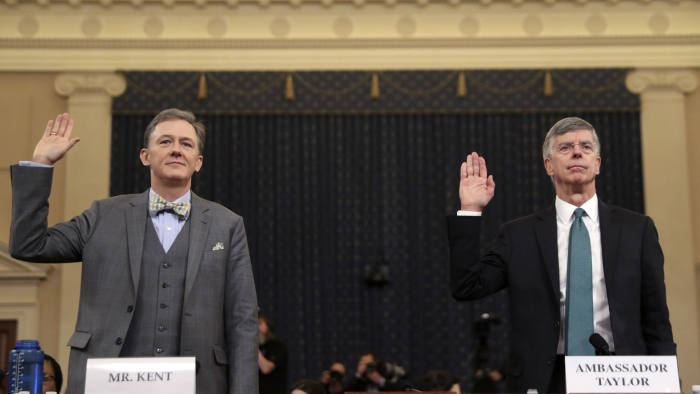 Two top US diplomats delivered gripping testimony Wednesday about Donald Trump’s efforts to get Ukraine to investigate his potential 2020 rival Joe Biden, as the impeachment inquiry into the president shifted into a new phase of high-stakes televised hearings.

Trump dismissed the probe in the Democratic-led House of Representatives as a “witch hunt” and said he was “too busy” to watch the first public hearings, during which he received staunch backing from lawmakers of his Republican Party.

William Taylor, the top US diplomat in Ukraine, began his testimony before the House Intelligence Committee with a new revelation about Trump’s efforts to pressure Kiev to investigate the Democrat Biden — the matter at the heart of just the fourth impeachment process in US history.

Trump is accused by Democrats of abusing his power by using US military assistance and a possible White House meeting to pressure President Volodymyr Zelensky into opening a probe into Biden and his son Hunter, who served on the board of Ukrainian gas company Burisma.

The key evidence is the official White House transcript of a July 25 telephone call between Trump and Zelensky in which the US president asked his Ukrainian counterpart to open investigations into the Bidens.

Taylor testified that he was told Trump cared more about the probe into his rival than he did about Ukraine.

The grey-haired former US Army officer and veteran diplomat, who testified in a closed hearing last month, said he had since become aware of a telephone call between Trump and Gordon Sondland, the US ambassador to the EU, that was overheard by a member of Taylor’s staff.

Taylor said the staff member asked Sondland after the call what Trump thought about Ukraine.

Asked about the new allegations, as he hosted his Turkish counterpart Recep Tayyip Erdogan at the White House, Trump replied: “First time I’ve heard it.”

“He did speak to me for a brief moment,” he said of Sondland, “and I said no quid pro quo under any circumstances.”

Republican lawmakers sought to undercut the testimony of the witnesses by focusing on Hunter Biden’s role on the Burisma board, pointing out that he was paid $50,000 a month and questioning his qualifications.

They also stressed that the Ukrainians were not aware for months that the White House had put a hold on the nearly $400 million in military assistance and that it was eventually released in September.

“What did President Zelensky actually do to get the aid?” asked John Ratcliffe, a Republican congressman from Texas. “The answer is nothing. He didn’t open investigations.

“He didn’t do any of the things that House Democrats say that he was being forced and coerced and threatened to do,” Ratcliffe said.

In his opening statement, Taylor recalled his opposition to making US military aid to Ukraine or a White House visit by Zelensky contingent on Kiev investigating the Bidens.

“Withholding security assistance in exchange for help with a domestic political campaign in the United States would be crazy,” he said. “I believed that then and I believe it now.”

George Kent, a bow-tie wearing career diplomat who was the other witness at the somber and occasionally acrimonious hearing, was asked what interests Giuliani was promoting.

“I believe he was looking to dig up political dirt against a potential rival in the next election cycle,” said Kent, a deputy assistant secretary of state.

“I do not believe the United States should ask other countries to engage in selective politically associated investigations or prosecutions against opponents of those in power because such selective actions undermine the rule of law.”