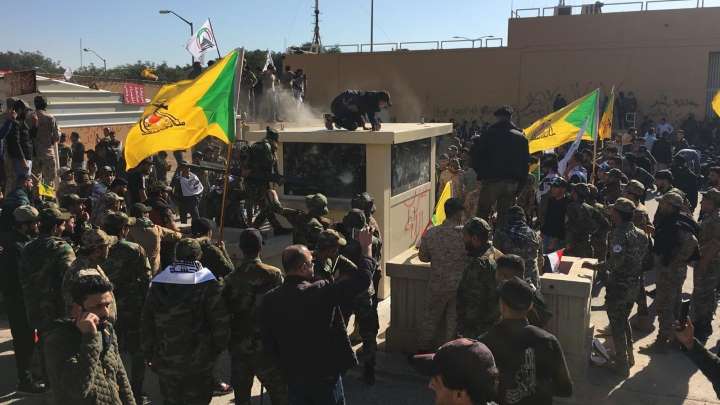 Iraqi supporters of pro-Iran factions attacked the US embassy in Baghdad on Tuesday, breaching its outer wall and chanting “Death to America!” in anger over weekend air strikes that killed two dozen fighters.

It was the first time in years protesters have been able to reach the US embassy, which is sheltered behind a series of checkpoints in the high-security Green Zone.

A stream of men in military fatigues, as well as some women, marched through those checkpoints to the embassy walls with no apparent reaction from Iraqi security forces.

US President Donald Trump in a Twitter message accused Iran of “orchestrating” the attack and said it “will be held fully responsible”, but he also said he expected Iraq “to use its forces to protect the embassy”.

The demonstrators waved flags in support of the Hashed al-Shaabi, a mostly Shiite network of Iraqi armed groups that has received training and weapons from powerful neighbour Iran.

They threw rocks and wrenched security cameras off the walls, ignoring calls over megaphones to leave the embassy compound.

In response, US guards fired an initial volley of bullets, then switched to tear gas and flash bang stun grenades to disperse the crowd.

The Hashed said at least 62 people were wounded.

Caretaker prime minister Adel Abdel Mahdi said that the crowds that had stormed the US embassy should leave the compound “immediately”.

“We recall that any aggression or harassment of foreign embassies will be firmly prohibited by the security forces,” Abdel Mahdi’s office said several hours after the attack began.

Following his statement, some of the crowd pulled back but others set up tents, swearing to pursue a sit-in.

The demonstrators were protesting US air strikes that killed at least 25 fighters from a hardline Hashed faction known as Kataeb Hezbollah (Hezbollah Brigades) on Sunday.

Those strikes were in response to a volley of 36 rockets last week that killed one US contractor at an Iraqi base, the first American casualty in a string of rocket attacks on US troops in Iraq.

The United States has around 5,200 troops deployed across Iraq to train security forces and prevent any resurgence of the Islamic State jihadist group.

The rocket attacks have not been claimed but US security assessments have largely blamed them on Kataeb Hezbollah.

Following the deadly strikes, the Iraqi government announced three days of mourning while Kataeb Hezbollah and other pro-Iran factions in the Hashed demanded the “withdrawal of the American enemy”.

Protesters echoed those calls on Tuesday, carrying posters reading: “Parliament should oust US troops, or else we will.”

Others carried banners with Trump’s face crossed out.

They scrawled “No to America!” and “Soleimani is my commander” on the embassy walls, referring to a leading commander in Iran’s Revolutionary Guards Corps and Tehran’s pointman for Iraq, Major General Qasem Soleimani.

Among those at the protests were Iraq’s National Security Adviser Faleh al-Fayyadh — who is also the head of the Hashed — and other top Hashed officials.

Some Hashed figures drew parallels between Tuesday’s attack and the hostage crisis at the US embassy in Tehran in 1979.

The US embassy in Iraq is already operating at a fraction of its full diplomatic staffing after the State Department pulled out non-essential employees in May.

US ambassador Matthew Tueller has been outside Iraq for two weeks on holiday but other staff were present and had not been evacuated, a diplomatic source told AFP.

The US shut down its consulate in the southern port city of Basra last year after indirect fire it blamed on Iran-backed factions.

It still operates a consulate in the northern Kurdish city of Arbil.