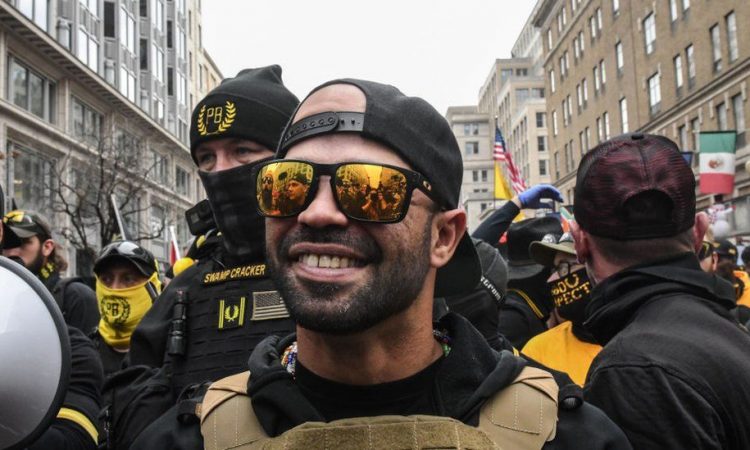 The leader of the far-right Proud Boys group, at the heart of recent pro-Trump protests, was once a “prolific” informer for the FBI and local police, old court transcripts show.

He denied the allegations when asked by Reuters, which broke the story.

There is no suggestion he has been an informer while leading the Proud Boys.

But the revelations will surprise many.

Tarrio, 36, was arrested two days before the 6 January 2021 riots at the US Capitol in Washington, which other members of his group took part in.

He was charged with carrying two high-capacity rifle magazines as well as burning a Black Lives Matter banner taken from a church in DC during a rally in December.

The court transcripts uncovered by Reuters relate to a hearing in a federal court in Florida in 2014 in which Tarrio and two others had pleaded guilty in a fraud case relating to the resale of diabetic test strips.

Both the prosecutor and Tarrio’s defence lawyer asked the judge for leniency in sentencing, pointing to his extensive co-operation with both federal and local law enforcement since a previous arrest in 2012.

The prosecutor said Tarrio’s undercover work had led to the prosecution of 13 people and the court heard he had helped police investigate a gambling ring, the sale of both prescription and illegal drugs and human smuggling.

“Your Honour, frankly, in all the years, which is now more than 30 that I’ve been doing this, I’ve never had a client as prolific in terms of co-operating in any respect,” Tarrio’s then lawyer Jeffrey Feiler, told the court, according to the transcript.

The judge eventually reduced Tarrio’s sentence from 30 months to 16 months.

Mr Feiler, when interviewed by Reuters, said he did not recall the details of the case but added: “The information I provided to the court was based on information provided to me by law enforcement and the prosecutor.”

Tarrio denied to Reuters that he had ever worked undercover or co-operated with the police in cases against others, saying: “I don’t know any of this. I don’t recall any of this.”

He did acknowledge that his sentence had been reduced but insisted it was because he had his co-defendants help investigators “clear up” questions about his own case, Reuters reports.

Miami-based Tarrio became leader of the Proud Boys in 2018 – two years after the group was established by Canadian-British right-wing activist Gavin McInnes.

The group is a far-right, anti-immigrant, all-male group with a history of street violence against its left-wing opponents.

Their platform, such as it is, includes Trumpian ideas (“glorify the entrepreneur”, “close the border”) libertarianism (“give everyone a gun”, “end welfare”) and traditional gender roles (“venerate the housewife”).

The group was referenced by then-President Donald Trump during the first presidential debate last October. Responding to a question about white supremacist and militia groups, he said, “Proud Boys – stand back and stand by” which members of the group online took as a call to prepare for action. Mr Trump later distanced himself from the group.