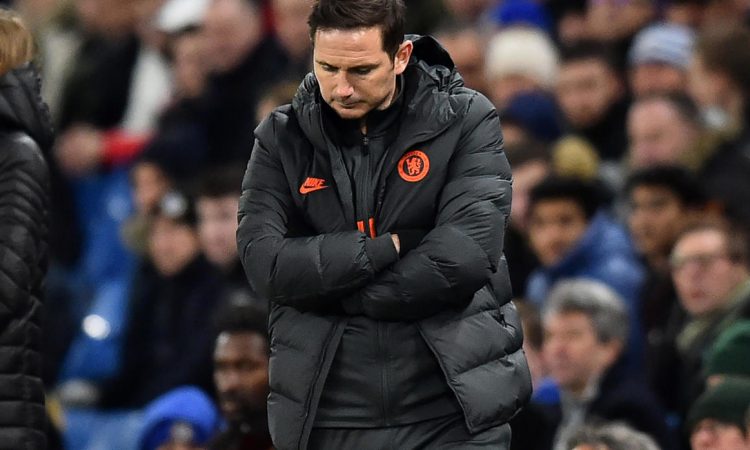 Frank Lampard admitted Chelsea were given a “reality check” by Bayern Munich as the Germans pushed his team to the brink of Champions League elimination with a 3-0 victory in the last 16 first leg on Tuesday.

Serge Gnabry scored twice in three minutes early in the second half and Robert Lewandowski bagged Bayern’s third goal to complete a masterful display from Hansi Flick’s side at Stamford Bridge.

Bayern are odds-on to finish off Chelsea in the second leg in Munich on March 18 after inflicting the Blues’ heaviest European home defeat.

Lampard conceded Chelsea had been outclassed from start to finish and urged his players to learn from the chastening experience.

“That’s football at this level, the levels of Bayern were fantastic. It was a harsh lesson for the players. It’s the reality of the Champions League,” Lampard said.

“If you give people of that quality enough chances they will score goals.

“There is a lot to their team, players that have been there a long time. We have to respect that.

“But we weren’t confident on the ball, that was my biggest disappointment, from start to finish.”

It was a night when all of the problems that have dogged Chelsea at times during Lampard’s first season were on display.

Chelsea were toothless up front with Lampard’s decision to start Olivier Giroud instead of Tammy Abraham backfiring.

They lacked organisation at the back and drive and creativity in midfield, with a lack of leadership also notable as they lost their heads with the tie slipping away.

Jorginho will miss the second leg after earning a needless booking for arguing with the referee, while Marcos Alonso will also be suspended following his late red card for whacking Lewandowski.

Lampard could not hide his frustration and made it clear few of his players came out of the match with any credit.

“I learned about the players. We have to show character. They need to use it to positive effect,” Lampard said.

“When you have an eye-opener like tonight, the only answer is to say ‘I’m not going to look at anyone else in the team but myself. Who was my direct opponent and how did I do?’

“I thought the only player who showed that personality who looked like he could play in any team was (Mateo) Kovacic.”

Lampard’s side have now lost eight matches at Stamford Bridge in all competitions this season, their most in a single campaign since 1985-86.

They have often been better away from home, but it would take a miracle, at the venue where they beat Bayern in the 2012 Champions League final, to make the quarter-finals now.

We have to go and play with pride and not consider the scoreline too much. It’s pretty clear we are in a very bad position going into the second leg,” Lampard said.

“I’m more concerned about the big picture and how quickly we can recover in the Premier League.”

Bayern are the third team in Champions League history to win their first seven games.

By their high standards, this group had endured a troubled season domestically, but they have rounded into form since Flick replaced Niko Kovac as manager.

Gnabry’s second superb performance in London this season, following his four-goal haul in the thrashing of Tottenham, showcased the poise and precision flowing through Bayern’s play at present.

Asked if he was surprised Gnabry hadn’t made the grade at Arsenal at the start of his career, Flick said: “I’m happy about this!

“I’ve known Gnabry quite a long time. I saw how he played at Arsenal and you could just tell what he could do.

“It was a really good result for us. The team performed exactly as we had planned.”