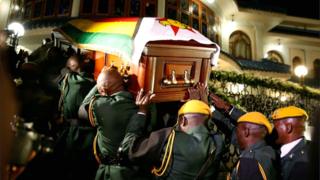 Robert Mugabe’s family say they are shocked at not having been consulted by the government about arrangements for the funeral of the former Zimbabwean president.

Mugabe, who was 95, died last week while undergoing medical treatment in a Singapore hospital.

His body is being prepared to lie in state at a football stadium in Zimbabwe’s capital, Harare.

His family and the government disagree over Mugabe’s final resting place.

Mugabe’s family says his body will be displayed in his home village of Kutama on Sunday night, and will be buried at a private ceremony.

President Emmerson Mnangagwa had declared Mr Mugabe a national hero after his death, indicating he should be buried at the national monument.

Education Minister Paul Mavhima says there is no doubt Mr Mugabe should be buried as a national hero.

“Such an icon, one whose funeral service is going to be attended by almost 50 current and former heads of state. Such a founding father of this country, there should never be a discussion about that.

There should never be any conflict whatsoever. The decision should be clear, he should go to the national shrine,” he told the BBC.