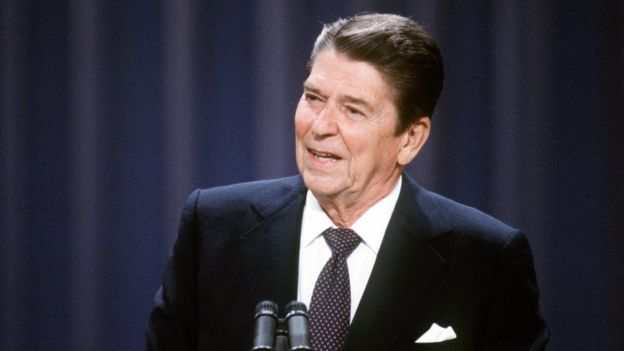 The daughter of the late former US President Ronald Reagan has said there is “no defence” for racist comments he made in a 1971 phone conversation.

His daughter Patti Davis condemned the remarks in a newspaper article.

“There is no defence, no rationalisation, no suitable explanation for what my father said,” she wrote.

Ms Davis wrote in an article for the Washington Post that she was preparing to defend her father before she heard the tapes, but was appalled to hear what the former president said.

Reagan made the comments in a conversation with then-President Richard Nixon.
He was referring to Tanzanian delegates at the UN, who had just sided against the US in a vote to recognise China and expel Taiwan.

Reagan – a supporter of Taiwan – called the president the next day, telling him: “To see those… monkeys from those African countries – damn them, they’re still uncomfortable wearing shoes!”

Nixon can be heard laughing loudly after the comments.

When running for California governor in 1966, the former actor said that “if an individual wants to discriminate against Negroes or others in selling or renting his house, it is his right to do so”.

As president, he tried to block a bill that would impose sanctions on apartheid South Africa. The House overrode his veto.

Reagan denied any suggestions he was racist.