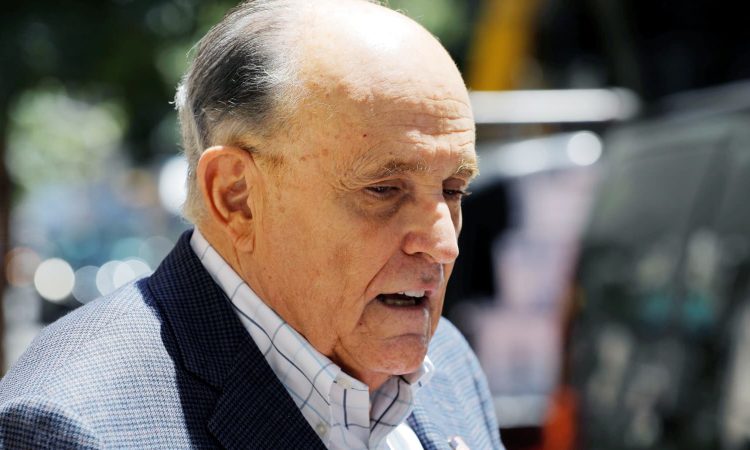 Rudy Giuliani has had his law licence suspended in New York for making “demonstrably false and misleading” claims around the 2020 US election.

Mr Giuliani, 77, has been a mayor of New York City and a personal lawyer to former US president Donald Trump.

After Mr Trump’s defeat to Joe Biden in 2020, Mr Giuliani sought to overturn the result, claiming it had been fixed.

A New York appeals court ruled he had lied about electoral fraud to the public and in legal statements.

The decision, made by a five-judge panel, is temporary – pending the outcome of a full disciplinary hearing.

Since the election Mr Trump and his allies have filed dozens of lawsuits alleging voter fraud in last year’s elections. All but one have been dismissed by US courts, or withdrawn by prosecutors.

Lawyers for Mr Giuliani said they were disappointed with the NY ruling.

“Our client does not pose a present danger to the public interest,” they said in a joint statement. “We believe that once the issues are fully explored at a hearing Mr. Giuliani will be reinstated as a valued member of the legal profession that he has served so well in his many capacities for so many years.”

In their decision, the judges said Mr Giuliani had made several false statements about voting in the states of Arizona, Georgia and Pennsylvania – including claims that hundreds of thousands of absentee ballots and other votes had been improperly counted.

The court rejected Mr Giuliani’s argument that investigations into his conduct violated his right to free speech. It also suggested the suspension may eventually be permanent.

The suspension itself marks a big change in fortunes for Mr Giuliani, who once had a prominent legal and political career in New York.

He was admitted to the state bar in 1969 and eventually served as US Attorney for the Southern District of New York under the Ronald Reagan administration.

He became the city’s mayor in 1994 and later earned widespread national praise for his response to the 11 September 2001 attacks.

Thursday’s development comes only months after Mr Giuliani’s home and office were raided by the FBI as part of an unrelated investigation into his alleged dealings with Ukraine.