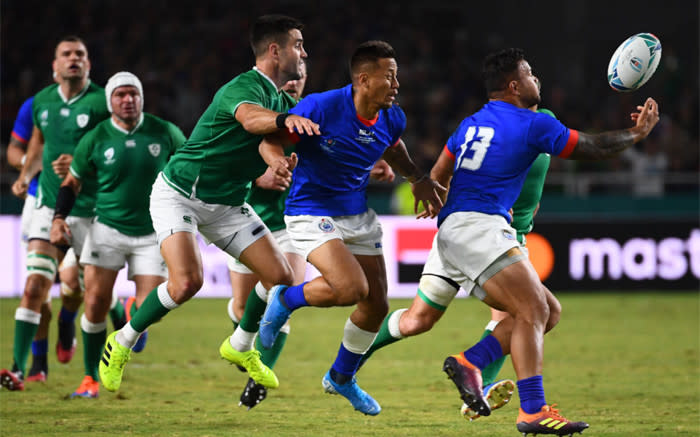 Ireland had Bundee Aki sent off for a high tackle in the first half but they were still too much for Samoa as they qualified from a tight Pool A despite their shock loss to Japan.

With Ireland safely through to the play-offs it leaves Japan and Scotland in a straight shoot-out on Sunday for the remaining Pool A slot.

If the game is cancelled because of Typhoon Hagibis, which slammed into Japan on Saturday, the host team will qualify ahead of Scotland.

Whoever tops the pool will play South Africa in the quarter-finals while the runner-up will face defending champions New Zealand, whose final match against Italy was cancelled because of the typhoon.

Ireland were down to 14 men in the 28th minute when Aki, who is of Samoan descent, was sent off for a shoulder to the head of Samoan fly-half Ulupano Seuteni.

Ireland coach Joe Schmidt said the dismissal was “devastating” for Aki, who faces missing the rest of the tournament.

“It’s hard to argue (about the red card) at the moment but it’s pretty devastating for Bundee,” said Schmidt.

“He knows a lot of the Samoan players really well, I know they’ve got a lot of respect for him and for us it’s a really disappointing finish to the night.”

Earlier, Samoa hooker Seilala Lam had been yellow-carded for a similar high shot, but he had tried to lower his point of contact while Aki remained upright and referee Nic Berry ruled there was “a high degree of danger”.

Ireland were up 21-5 at the time, but even with a man down they still managed the bonus-point fourth try before half-time when Sexton scored his second.

In the second half, amid farcical scenes of ground staff repairing huge divots that opened up in the newly laid turf, Ireland added three more tries and kept Samoa scoreless.

Ireland coach Joe Schmidt had complained before the match that the All Blacks would benefit from the extended break caused by the cancellation of their game against Italy.

But, there was an advantage too for Ireland who started with a solid win against Scotland then went off the boil against Japan and Russia, and Samoa gave them a chance to get their green machine working smoothly again.

As forecast strong winds in Fukuoka from the outer edges of the typhoon did not eventuate, Conor Murray and Sexton were able to work on their kicking game to give Ireland a territorial advantage.

From there, Tadhg Furlong and James Ryan led an emerald tide that bullied their way forward.

The opening try to Rory Best came from a lineout drive and Furlong scored the second by charging directly into the Samoan defensive wall and emerging on the other side with the try line in front of him.

Fullback Jordan Larmour, who was a threat each time he ran with the ball, created the gap which gave Sexton his first try.

Jack Lam put Samoa on the board with a try before Sexton scored the vital fourth try right on half-time when Murray went the short side from a five-metre scrum.

It was another blindside move by Murray early in the second half that saw Larmour go over in the corner.

When flanker TJ Ioane was sent to the sin-bin for a ruck infringement, one of 17 penalties conceded by Samoa, Ireland mounted a sustained forward-led attack which resulted in a try to backrower CJ Stander before Andrew Conway completed their scoring.