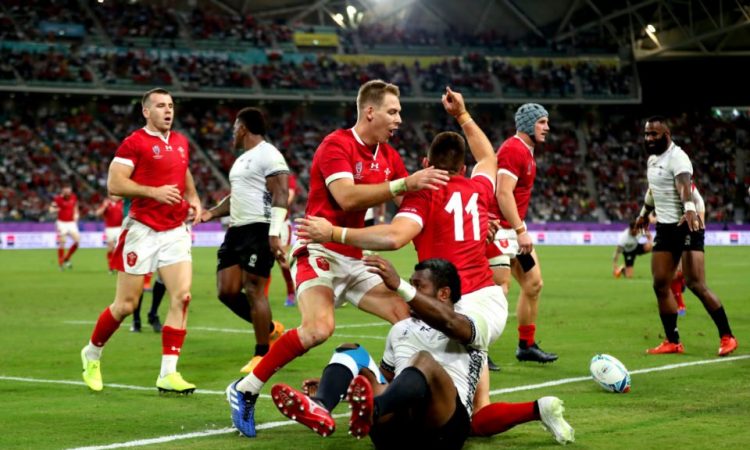 Wales weathered a furious Fijian onslaught to reach the Rugby World Cup quarter-finals on Wednesday, sending Australia through in the process, as Scotland thrashed Russia to set up a showdown with hosts Japan.

With approaching Typhoon Hagibis threatening to cause havoc with this weekend’s final pool games, the Welsh found themselves in a storm of their own before emerging from a physical battering with a 29-17, bonus-point win.

The result guarantees Wales and Australia’s progress from Pool D, which the Welsh top by three points ahead of their remaining game against Uruguay. Australia play Georgia on Friday.

“Look, that was tough. They’ve got some unbelievable individuals and we just had to stay in it,” said Wales coach Warren Gatland.

“We’ve got a tough four-day turnaround to Uruguay. I think the medics are going to be working pretty hard in the next 24-48 hours. But pleasing to get that bonus-point win,” he added.

With the pool stage culminating this weekend, officials warned that Hagibis, currently classed as “violent” — the top end of Japan’s storm scale — is on track to hit parts of Japan’s coast, possibly barrelling straight into Tokyo on Saturday.

World Rugby is due to give an update on the situation on Thursday. The typhoon could also affect this weekend’s Formula One Japanese Grand Prix in Suzuka, west of Tokyo.

The western city of Oita was treated to an end-to-end clash marked by heavy challenges and a sickening, accidental blow to the head which ended Wales fly-half Dan Biggar’s involvement.

Josua Tuisova smashed through three defenders to score Fiji’s first try before Kini Murimurivalu made it 10-0 after just eight minutes, with Ben Volavola missing both conversions.

But Josh Adams leapt high to gather Biggar’s cross-field kick and get Wales on the board, and he dotted down again to make it 14-10 at the break as Tevita Cavubati and then Ken Owens spent time in the sin-bin — the first two of four yellow cards in all.