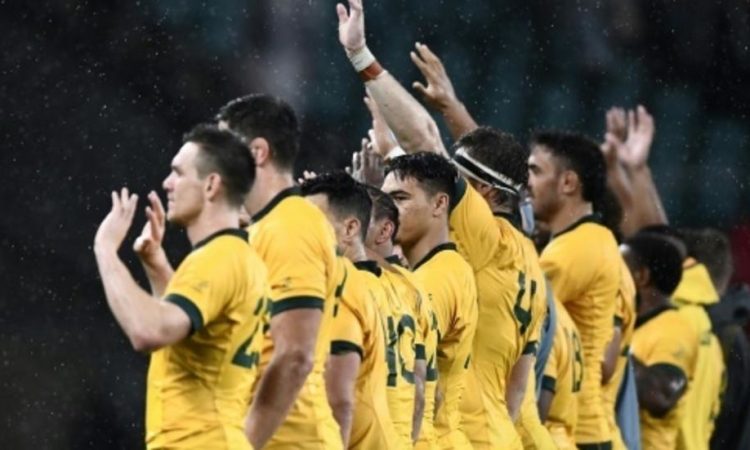 Australia fine-tuned preparations for a likely Rugby World Cup quarter-final against England with a hard-fought, error-strewn 27-8 Pool D victory over Georgia at Shizuoka on Friday.

Wales’ 27-19 win over Fiji on Wednesday had guaranteed the Wallabies a place in the last eight, with the Welsh playing minnows Uruguay on Sunday in a match that should see them book the pool winners’ spot.

In blustery conditions and heavy rain as Typhoon Hagibis headed for landfall on Japan’s east coast, Australia were forced into a real arm wrestle by the hard-hitting Georgians in the two countries’ first-ever Test match.

The Wallabies dominated possession and territory early on, and successfully pitted their set piece against one of the strongest at the World Cup.

But the Georgians put in a mean defensive shift and kept in the game by seizing on a catalogue of basic handling errors by their Tier One opponents.

“I think we missed a few opportunities in attack. We could have stepped up a played a bit flatter. I think we stayed a bit too far back,” said Wallabies coach Michael Cheika.

“The conditions were a bit tricky, the rain, the wind. But no excuses,” added the coach.

Veteran centre Davit Kacharava, extending the Georgian Test cap record to 119, took it one step too far, however, miraculously escaping a yellow card from French referee Pascal Gauzere after crashing his elbow into the face of a prone Kurtley Beale.

The fleet-footed full-back received medical attention before leaving the pitch for a head injury assessment, never to return to the pitch at Shizuoka’s Ecopa Stadium.

The Georgians repelled wave after wave of attack, notching up almost 80 tackles in the first 20 minutes.

But an initial break by Matt Toomua set up another Wallaby attacking platform and Georgia eventually wilted, scrum-half Nic White burrowing past Mikheil Nariashvili from close range for a try Toomua converted.

No 8 Isi Naisarani spilled the steepling restart to hand Georgia the advantage, Soso Matiashvili booting a penalty after a high Tolu Latu tackle as the ball was recycled in midfield.

White and Toomua were key cogs as Australia continued to launch a series of forays from rucktime, but Georgia’s defence continued to hold firm.

Five minutes before half-time, Naisarani was yellow-carded for a high tackle into the face of Giorgi Nemsadze, but it was Australia who instead got on the scoreboard next through Toomua’s second penalty.