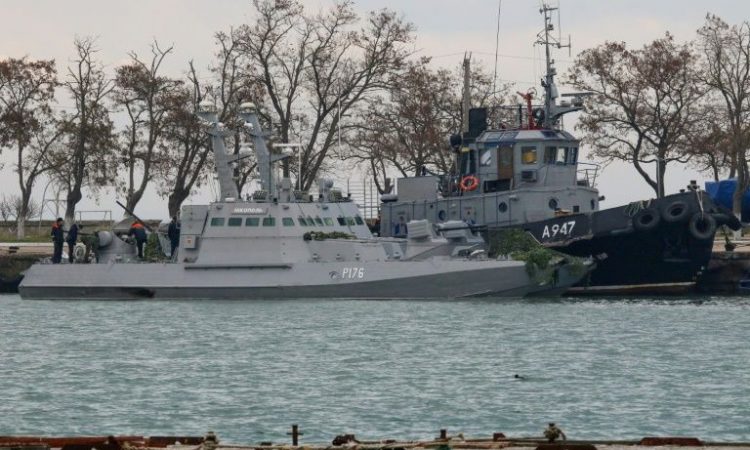 Russia on Monday handed over three navy ships it seized a year ago from Ukraine, Moscow and Kiev authorities said, in the latest move to ease tensions between the two countries ahead of a crucial summit.

After an exchange of prisoners in September and the withdrawal of some frontline forces over the last few weeks, the handover marked another step in trying to resolve the five-year conflict in eastern Ukraine.

Efforts have been building since the election of Volodymyr Zelensky as Ukraine’s new president, and on Friday France announced he would hold his first face-to-face talks with Russian President Vladimir Putin in Paris on December 9.

The talks, which will be mediated by French President Emmanuel Macron and German Chancellor Angela Merkel, will be the highest-level negotiations on the conflict since 2016.

Russia’s foreign ministry said on Monday that the ships — two gunboats and a tugboat — had been handed over to Ukraine.

It said they had “illegally crossed the Russian border” and been held as evidence but were no longer needed.

Ukraine confirmed the handover of the “Nikopol”, “Berdyansk” and “Yany Kapu” vessels.

The Ukrainian vessels were seized in November last year in the most serious confrontation between the two countries since the start of the conflict in 2014.

Russian forces took control of the vessels as they headed through the Kerch Strait, a narrow waterway giving access to the Sea of Azov that is used by Ukraine and Russia.

They captured 24 Ukrainian sailors, who were returned to Ukraine as part of the September prisoner swap.

Television on Sunday showed footage of the ships being towed by the Russian coastguard through the Kerch Strait.

The election of Zelensky, a television comedian who shocked the country’s elites by winning the presidency in April, has raised hopes the conflict can finally be resolved.

Zelensky has said ending the war — which has left more than 13,000 dead — is his top priority.

Kremlin spokesman Dmitry Peskov confirmed Monday the talks would go ahead on December 9 but appeared to downplay hope of a major breakthrough.

“There was a long delay, a long break in work under the Normandy format, and so we should not set expectations too high,” he said.

In Berlin, a foreign ministry spokesman said that for the first time in a long time there has been “some movement” in the conflict.

“We want to seize this momentum,” he said.

The four-way summit was initially announced by Macron for September, after talks with Putin in France, but was held up until the troop withdrawals took place.

The structure for the talks is known as the “Normandy format” after a first meeting brought together the four heads of state in France’s Normandy region in 2014.

The last such meeting took place in Berlin in 2016.

It aims to implement the “Minsk agreements”, deals reached in 2014 and 2015 to end the conflict but which have yet to be properly put in place.

The conflict in Ukraine’s industrial east broke out after Russia’s 2014 annexation of the Ukrainian peninsula of Crimea, which led the West to impose wide-ranging sanctions on Moscow.

The separatists have declared unrecognised breakaway statelets in the mainly Russian-speaking Ukrainian eastern regions of Donetsk and Lugansk.

Ukraine and its Western allies accuse Moscow of giving financial and military backing to separatists, which Russia denies.

September’s exchange was the first major step in years to reduce tensions, with the two countries swapping 70 prisoners.

It was followed over the last few weeks by the withdrawal of Ukrainian troops and separatist forces from several flashpoint areas along the frontline.

The Paris talks are expected to focus on a roadmap that would give special status to the separatist territories if they conduct free and fair elections under the Ukrainian constitution.

The conflict has been a major drain on Ukraine’s economy but Zelensky is facing opposition to his peace plan, especially from war veterans and nationalists.