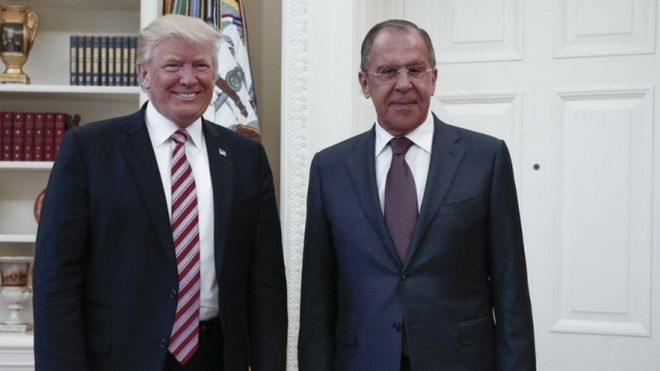 More details have emerged of an alleged high-level spy the US reportedly extracted from Russia amid fears his cover was about to be blown.

Russian media named him as Oleg Smolenkov, who worked for a key aide to President Vladimir Putin.

Mr Smolenkov was not senior, had been fired years ago and the extraction reports were fiction, the Kremlin said.

A CNN report said the CIA had feared President Trump’s “mishandling” of intelligence could put the spy at risk.

CNN said the extraction came after the president met senior Russian officials, including Foreign Minister Sergei Lavrov, in the White House in May 2017 and had unexpectedly shared classified US intelligence.

The CIA said CNN’s reporting of the extraction was “misguided” and “simply false”.

Later US Secretary of State Mike Pompeo described the report as “materially inaccurate”.

The alleged agent was not named by US media but it was claimed the intelligence asset was the highest-level US source inside Russia, with regular access to President Putin.

The reports said the source had spied for the US for more than a decade.

The New York Times said the agent was instrumental in the conclusion by US intelligence agencies in 2016 that Mr Putin had personally orchestrated Russia’s interference in the US presidential election.

However, its report said the CIA had wanted to extract the agent before Mr Trump took office because investigations by media were putting the asset at risk. There was no suggestion President Trump had directly compromised the source, it said.

On Tuesday, CNN quoted sources who had served under Mr Trump as saying the president had repeatedly expressed his opposition to using overseas spies because it damaged relations with other nations.