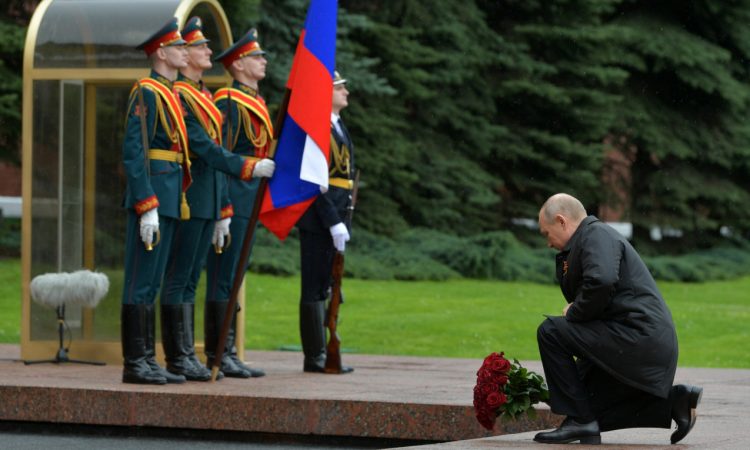 President Vladimir Putin told Russians they are “invincible” when they stand together as the country on Saturday marked the 75th anniversary of the end of World War II in lockdown from the coronavirus.

With cases surging and authorities urging Russians to stay in their homes, celebrations of this year’s Victory Day were muted after the Kremlin grudgingly postponed plans for a grand parade with world leaders.

Instead of columns of military hardware and thousands of troops marching through Red Square as planned, Putin walked alone to lay flowers at the Eternal Flame outside the red brick walls of the Kremlin.

In a solemn televised speech, he made no mention of the virus, despite Russia having the fifth-highest number of confirmed infections in the world.

Putin instead highlighted the sacrifices made by the Soviet Union in what Russians call the Great Patriotic War and hinted at the threat now facing the country.

“Our veterans fought for life, against death. And we will always be equal to their unity and endurance,” Putin said.

“We know and firmly believe that we are invincible when we stand together.”

An honour guard marched past Putin after his speech, as Russian television showed images of Red Square empty under cloudy skies.

Military helicopters, bombers and fighter jets flew over the city, releasing smoke in the red, white and blue of the Russian flag.

State television counted down a minute of silence later in the evening, to commemorate the millions who perished in the war.

The pandemic hit Russia later than western Europe but the country has seen a major increase in cases, with more than 10,000 new infections registered every day this week.

On Saturday officials said the number of confirmed infections had risen by another 10,817 to reach a total of 198,676, putting Russia behind only the United States, Spain, Italy and Britain in total cases.

Russia says the increase is due in part to a huge testing campaign, with more than 5.2 million tests carried out so far.

The country’s reported mortality rate is much lower than in many countries, with 1,827 dead from the coronavirus as of Saturday.

Critics have cast doubt on the numbers and accused authorities of under-reporting deaths.

The pandemic has been a major blow to Putin’s political plans for this spring.

The postponed Victory Day parade, which was due to be attended by world leaders including China’s Xi Jinping and Emmanuel Macron of France, had been meant as a showcase of Russia’s increased global prestige under Putin.

He was also forced to postpone a vote last month on constitutional reforms that would have paved his way, after being in power for more than 20 years, to potentially stay in the Kremlin until 2036.

As with others around the world, Russians are deeply worried about the long-term economic impact of the pandemic and polls show many are increasingly frustrated with the government’s handling of the crisis.

One survey by independent pollster Levada this week showed Putin’s approval rating falling to a historic low of 59 percent in April.

Authorities across the vast country have ordered a range of quarantine measures with Moscow, the epicentre of the epidemic, in a strict lockdown until the end of May.

Several Communist politicians were detained in central Moscow while trying to stage a small rally by unfurling red Soviet flags and playing the accordion. They were released after several hours.

The capital’s streets were largely empty on Saturday, although a few residents wandered out under the grey skies and drizzle.

Pensioner Vladimir Trofimov told AFP it was important to mark the anniversary despite the pandemic.

“This holiday is not only about the parade on Red Square,” he said. “It’s about victory, every person feels victory in their own heart.”

While most other ex-Soviet countries also remain under lockdown, Belarus went ahead with its traditional military display.

President Alexander Lukashenko has dismissed the dangers of the coronavirus and some 4,000 troops paraded in Minsk before crowds of spectators, many not wearing face masks.