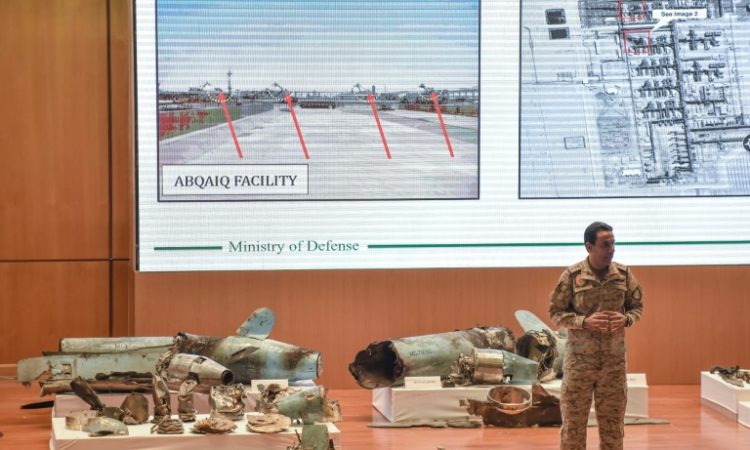 Saudi Arabia said Wednesday that strikes on its oil infrastructure were “unquestionably” sponsored by Iran, adding that the strikes originated from the north but the exact launch site was yet to be pinned down.

It displayed what it said were fragments of the arsenal of 18 drones and seven cruise missiles that devastated two facilities in the country’s east, knocking out half the kingdom’s oil production.

“The attack was launched from the north and unquestionably sponsored by Iran,” defence ministry spokesman Turki al-Maliki told a press conference.

“We are working to know the exact launch point.”

However, he would not be drawn on whether Saudi Arabia believed that Iran would ultimately be found to be the culprit, only saying they were confident they would find where the weapons were fired from.

Diplomats at the United Nations said experts were expected in the kingdom to lead an international inquiry.

US Secretary of State Mike Pompeo, who has directly blamed Iran for the strikes, was due to hold talks Wednesday with Saudi leadership as he arrived in Jeddah to weigh with the US allies a response to the strike that roiled global energy markets.

Yemen’s Iran-backed Huthi rebels, who have claimed Saturday’s strikes, vowed meanwhile they had the means to hit “dozens of targets” in the United Arab Emirates.

President Donald Trump — who has already re-imposed sanctions that have crippled Iran’s economy — on Wednesday promised to “substantially increase” the measures, winning quick praise from Riyadh.