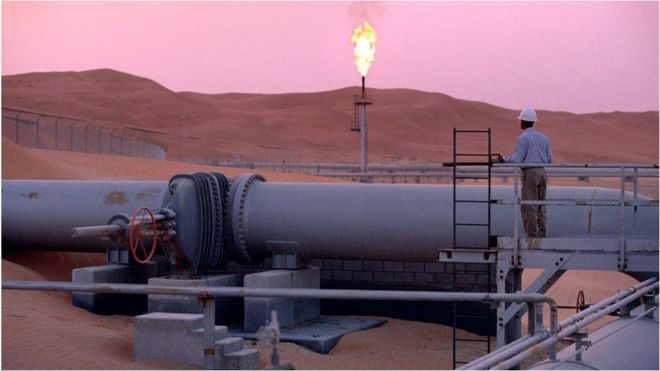 Saudi Aramco has confirmed it is planning to list on the Riyadh stock exchange, in what could be the world’s biggest initial public offering (IPO).

The state-owned oil giant will determine the IPO launch price after registering interest from investors.

Business sources say the Saudis are expected to make shares available for 1% or 2% of the firm, and the offer will be for existing company shares.

The firm said it has no current plans for a foreign share listing, saying long-discussed plans for a two-stage IPO including an offering on a foreign exchange had been put aside for now.

“For the (international) listing part, we will let you know in due course. So far it’s only on Tadawul,” Aramco chair Yasir al-Rumayyan told a media conference, referring to the Saudi stock exchange.

Chris Beauchamp, chief market analyst at derivatives traders IG Group, said: “Investing in Aramco carries risks, of course, and not only that oil prices will struggle to move higher.

“Political and strategic risks are high for any firm operating in the region, not least one which is an arm of the Saudi state. Aramco also has limited control in output policy, a key part of Saudi Arabia’s Opec management.”

Those potential risks were highlighted in September when drone attacks hit the Abqaiq oil facility and the Khurais oil field in Saudi Arabia, both owned by Aramco.

But Aramco boss Amin Nasser, who called the plans “historic”, told a media conference after the IPO statement was published that the firm was still the most reliable oil company globally.

In its launch announcement Aramco said: “The company does not expect the impact of these attacks to have a material impact on its business, financial condition or results of operations.”

Saudi Aramco is worth $1.2tn, according to analysis from financial news service Bloomberg, although Riyadh would prefer a valuation of $2tn, which is one reason the company’s share sale has been delayed a number of times.

Mr Beauchamp from IG Group says: “Aramco is a world away from the tech IPOs that have been all the rage lately, but the valuation problem still haunts them like it does the firms of Silicon Valley.”

He adds: “$2 trillion probably overstates the worth of the firm in a world of high oil supply and uncertain demand, but $1.2 trillion is too low for a vital part of the Saudi state”.