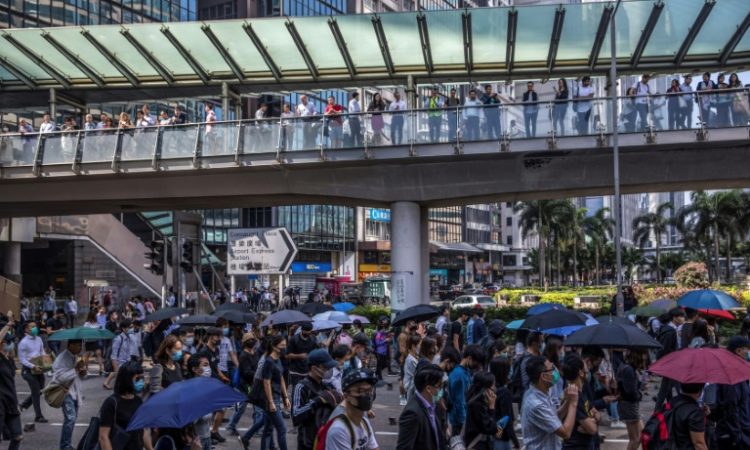 China’s rule of Hong Kong choked the city with barricades and rallies for a fourth straight day Thursday, as the police force drafted in reinforcements and Chinese state media fuelled speculation of a curfew.

The five-month crisis entered a new phase on Monday when hardcore protesters embarked on a campaign to “blossom everywhere” across the international financial hub, in a bid to stretch police resources as thinly as possible.

Dressed in their signature black, the masked protesters set up barricades on roads, vandalised train stations, rampaged through shopping malls and orchestrated rolling confrontations with riot police in multiple locations.

Another element of the protesters’ tactical shift was to disrupt the city for consecutive days in a working week, switching from their long-running strategy of primarily protesting on weekends or in the evenings.

On Thursday, key arterial roads were again cut, many train services were suspended, schools were closed, lunchtime rallies were held in the business district and protesters occupied universities.

With the protesters showing no signs of relenting, the nearly 30,000-strong police force announced it was drafting in 100 prison guards and looking for other reinforcements.

“The ongoing riots… with their massive scale, simultaneous occurrence in various districts and grave severity of violence, make it necessary to strengthen the support for the police’s front-line officers,” a police spokesman said in a statement announcing the prison guards would be called in.

No other reinforcement measures were announced, although lawmaker Starry Lee, of the city’s biggest pro-Beijing party, urged the government to deploy auxiliary police officers.

The part-time volunteer force of civilians and ex-officers is usually used to direct traffic and control crowds at major outdoor sports or entertainment events.

On Thursday, office workers joined a lunchtime rally in the city’s financial hub shouting “Fight for Freedom, Stand with Hong Kong”, as they voiced support for the hardcore protesters on the frontlines.

“A lot of young people have been hurt… so we have to come out,” a legal worker who only gave her surname as Chan told AFP.