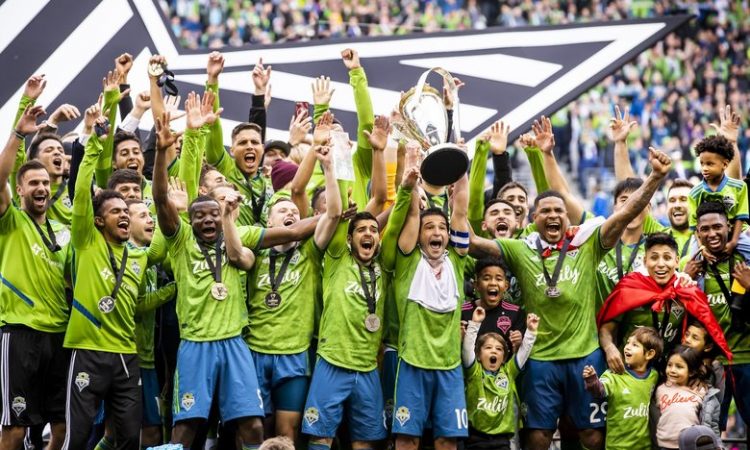 A noisy crowd of 69,274, the largest in the history of Seattle’s NFL and MLS stadium, roared in delight at the final whistle as the Sounders collected a second title in four campaigns.

“The atmosphere was amazing,” said Spanish reserve Rodriguez, who was named the MLS Cup Most Valuable Player. “I will remember this moment as long as I live. I’m really happy.”

It was the third championship match meeting over four seasons for Toronto and Seattle, but their first on US soil.

The Sounders won the 2016 crown on penalties after a goalless draw but the Canadian club avenged the loss by capturing the 2017 title 2-0.

“We are so competitive,” Rodriguez said. “We have really good mentality always. And at home with our fans it’s a little bit easier for us. I’m proud for all my teammates. We really deserved that.”

Dutchman Leerdam’s blast deflected in off Toronto defender Justin Morrow but officials chose not to call it an own goal in the 57th minute, the score against the run of play giving the Sounders the lead for good.

Rodriguez took a centering pass from Uruguayan midfielder Nicolas Lodeiro at the top of the box and smashed a right-footed shot into the far corner in the 76th minute.

American Jozy Altidore, who came off Toronto’s bench in the second half after missing most of the playoffs with a quadriceps injury, scored in the third minute of stoppage time to avert a shutout for the Reds.

Leerdam, a 29-year-old Suriname-born right back, hit a shot that was going wide before striking Morrow.

It wasn’t the first costly mistake by Morrow in an MLS Cup final. In 2016, he missed Toronto’s last penalty kick off the crossbar just before Seattle’s Roman Torres netted the title-taking kick.

It was the second MLS title for 57-year-old hometown coach Brian Schmetzer, who began his playing career with the original Sounders in 1980.

“It’s a good moment for Seattle and the fans and the players, who have overcome adversity all year,” he said.

“The first goal, Kelvin got the deflection and that got us started. My team is a dangerous team and that really got us going.”

Frei deflected a Benezet shot with his left arm in the 36th minute and Westberg saved a Ruidiaz right-footed blast from the heart of the box in the 45th minute to keep the game scoreless at half-time.