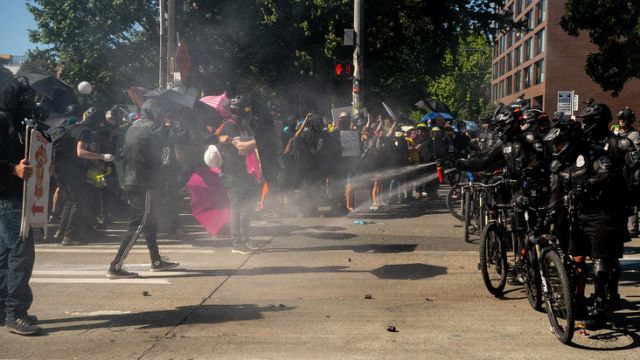 Police in the US city of Seattle clashed with crowds marching in support of anti-racism protests, in one of the most tense of several rallies held across the country on Saturday.

Officers used stun grenades and pepper spray, as protesters set a fire and broke windows. The march was in support of ongoing protests in Portland.

Forty-five people were arrested while 21 officers were injured.

In Austin, Texas one man was killed during a Black Lives Matter march.

Witnesses told local newspaper the Austin Statesman that a driver turned into a street where protesters were gathered, and started driving into the crowd.

The victim was part of a group that then approached the vehicle. A person inside the car then opened fire on the protesters. The victim was rushed to hospital and pronounced dead shortly afterwards. The suspect was arrested and is co-operating with officers, the Austin Police Department said.

In a statement shortly after the shooting, a police spokesperson did not identify the victim but said he had been seen carrying a rifle.

The victim’s mother later identified him as Garrett Foster, and told ABC’s Good Morning America that he was pushing his fiancée’s wheelchair at the time of the shooting.

“They’d been participating in these protests [against racism] almost every day for the past 50 days,” Sheila Foster told the programme. “He was doing it because he felt really strongly about justice and he was very heavily against police brutality, and he wanted to support his fiancée – his fiancée is African-American.”

Ms Foster added that it “wouldn’t surprise” her if her son had been carrying a gun, as he had a licence to carry and “he would have felt the need to protect himself”.