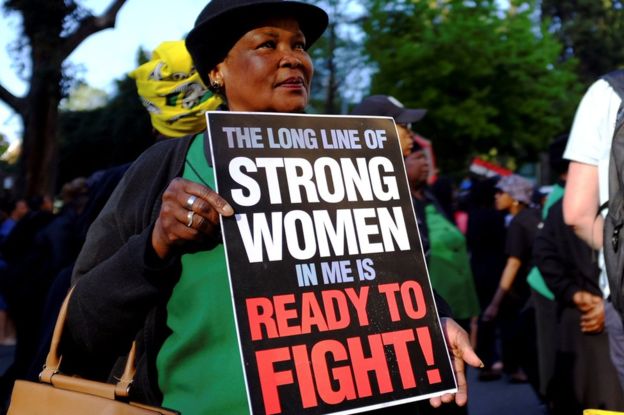 People campaigning over the high levels of violence against women in South Africa have taken their protest to the financial heart of the country.

Hundreds have gathered outside the Johannesburg Stock Exchange to call on the country’s big firms to do more to tackle gender inequality.

Recent protests have been triggered by the rape and murder of 19-year-old Uyinene Mrwetyana in Cape Town.

That amounts to more than one rape every 15 minutes. Police statistics also show that eight women are murdered every day in the country.

There was a sombre mood at the protest, which brought traffic to a standstill in Johannesburg’s Sandton district, reports the BBC’s Nomsa Maseko.

She adds that tears were rolling down the women’s faces as they started singing “Senzeni na?”, which loosely translated from Zulu means “what have we done to deserve this?”.

Among the protesters’ demands were that all companies listed on the stock exchange should set aside 2% of their profits to go towards tackling violence against women.

“We really are suffering [from] femicides and we need all hands on deck and business [in] South Africa is not exempt from that,” Mandisa Khanyile, one of those organising the march, told the BBC’s Newsday programme.

She said one of the things that needed funding was an education programme to get people to move away from the “toxic masculinity” that allows men to think that violence against women is acceptable.

A nurse, who was among the protesters, told the local eNCA news channel that she sees the victims of violence “each and every day… and we are saying ‘we have had enough with the men doing this to our kids”.

“The government must stop all this,” she added, “we want to go to work without the fear of being victimised.”

President Cyril Ramaphosa has been criticised for not doing enough to tackle the problem.

Last week, he was heckled at a rally outside parliament when he told protesters that violence against women was a national crisis. He pledged to review the laws on violence and sexual offences to make sure they were more effective.

In August Ms Mrwetyana, a student at the University of Cape Town, was raped and beaten to death. A man has been charged over the attack.