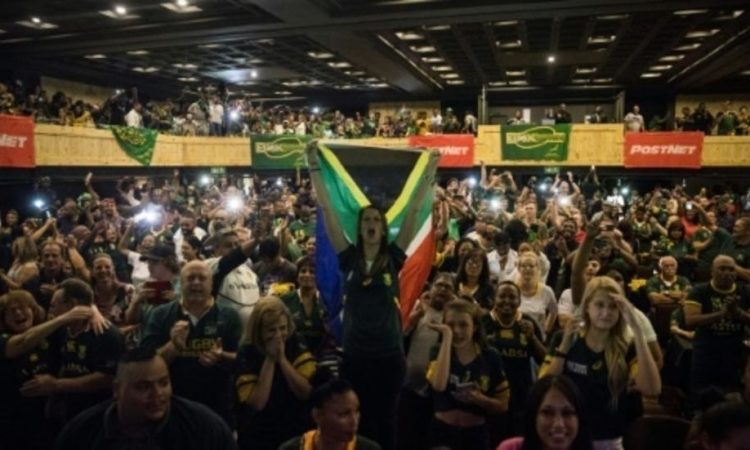 South Africans will put their economic woes to one side this week to come together and celebrate the Springboks’ Rugby World Cup triumph in Japan with a series of parades around the country.

The triumphant team arrives on a series of flights during Tuesday and Wednesday with captain Siya Kolisi and coach Rassie Erasmus expected to be among the first to land.

Thousands are expected to line streets in each city and honour the Springboks, who rewrote the history books by winning the four-yearly global competition a record-equalling third time.

Given no more than a 50/50 chance by most of beating England in the final last Saturday, the Springboks took an early stranglehold and two late tries completed a decisive 32-12 victory.

The dire state of the economy was forgotten, if only briefly, as sport fans finally had something to cheer after poor recent results by the national football and cricket teams.

Although boasting the most developed economy in Africa, South Africa is struggling with stagnant growth, record near-30 percent unemployment and widespread poverty and inequality.

“Our problem is that we spend more than we earn,” warned finance minister Tito Mboweni in parliament last week as the national debt balloons.

President Cyril Ramaphosa acknowledged the positivity of the Springboks’ successful campaign in a digital message, lauding the feel-good atmosphere created by the national team.

“At a time when South Africa is experiencing profound challenges, we have rallied around the victory in Japan,” he said.

“The outpouring of support for the Springboks on the road to the final once again showed the immense potential of sport to unite us as a people.

“Saturday was a triumphant day as it confirmed what we are as a nation, firm in its resolve to find unity in its diversity, as exemplified in our national rugby team.”

Ramaphosa hailed Siya Kolisi, who overcame a challenging childhood in an impoverished township near coastal city Port Elizabeth to become the first black Test captain of the Springboks.

“This is the dream of a young man of humble circumstances to one day wear the green and gold jersey, and of a country that has enabled him to see it realised.”

For 90 years since its first international in 1891, the Springboks chose only white players, leaving blacks to play among themselves with no chance of international recognition.

Hopes of rapid racial transformation did not materialise, though, and when the Springboks conquered the world again in 2007 there were just two black starters, wingers JP Pietersen and Bryan Habana.

Government demands that the team be more representative of a country where 90 percent of the population is black fell on the deaf ears of rugby officials and coaches.

Kolbe was a candidate for the World Rugby Player of the Year award won by fellow Springbok Pieter-Steph du Toit and Mapimpi the second highest try scorer at the World Cup with six.