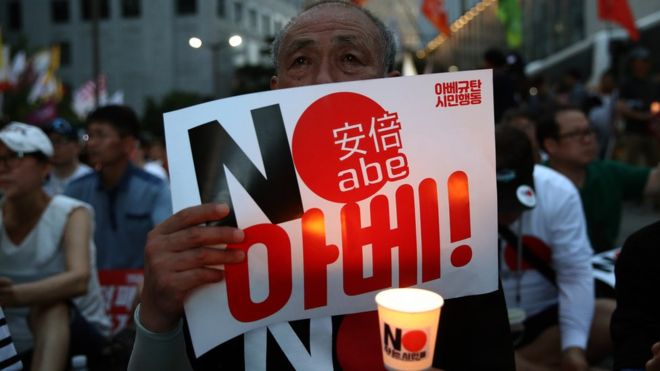 South Korea has said it will take Japan off its favoured trade partners’ list.

The move is a tit-for-tat response to Japan’s decision earlier this month to do the same to South Korea.

The legal decisions drew condemnation from Japan, which argues the dispute was settled in 1965 when diplomatic ties were normalised between the neighbouring countries.

The two nations share a complicated history that includes Japanese colonial rule of Korea from 1910 until the defeat of Japan in 1945.

The trade spat, which includes curbs on tech supplies, has sparked fears over risks to the global electronics sector.

In July, Japan tightened rules on the export of materials crucial for South Korean tech manufacturers.

Those restrictions, on products needed to make display panels and memory chips, have worried Seoul over the risks to its already slowing economy.

Both countries have accused each other of inadequate export controls.

Japan will now be placed in a new category of countries that have not run their export control systems in line with international principles.