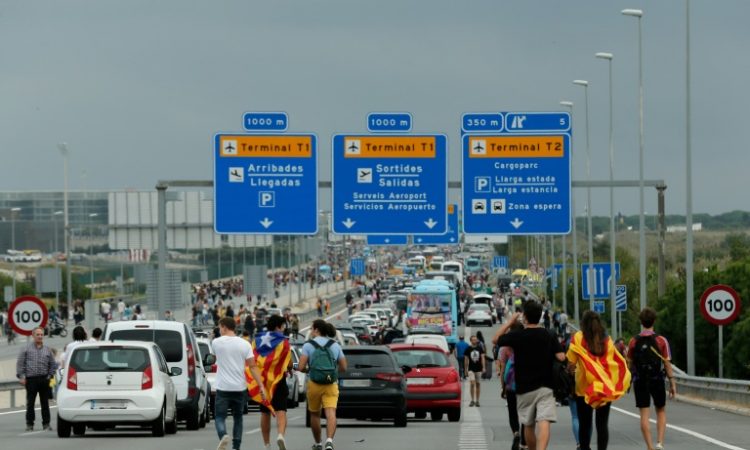 Scores of people have been hurt and dozens arrested in the past two nights of clashes between protesters and police in Barcelona and other Catalan cities.

Protesters are furious at the jailing of nine separatist leaders for their role in a failed 2017 independence bid that sparked a deep political crisis.

The convictions on Monday revived tensions in the wealthy northeastern region, split between Catalans loyal to Madrid and those who want it to break away from Spain.

In Barcelona on Tuesday night, police charged hundreds of masked demonstrators who threw projectiles at officers and set garbage bins and cardboard boxes on fire.

In a tweet, Sanchez said the government “firmly and resoundingly condemns the violence that seeks to break co-existence in Catalonia.”

On Wednesday thousands of protesters departed on foot along highways from five Catalan towns towards Barcelona.

They planned to gather there on Friday, when unions have called a general strike in the region.

He was scheduled to meet later with the leaders of centre-right Ciudadanos and far-left Podemos.

He said he would “convey the government’s determination to guarantee security, with firmness, proportionality and unity.”

The separatist movement has said there will be no let-up in the protests.

They erupted after the Supreme Court on Monday convicted 12 Catalan separatist leaders of sedition over the 2017 referendum and short-lived declaration of independence.

The court handed prison sentences of between nine and 13 years to nine of them and fines to the other three.

The ruling thrust the Catalan dispute to the heart of the political debate ahead of Spain’s November 10 general election, its fourth in as many years.