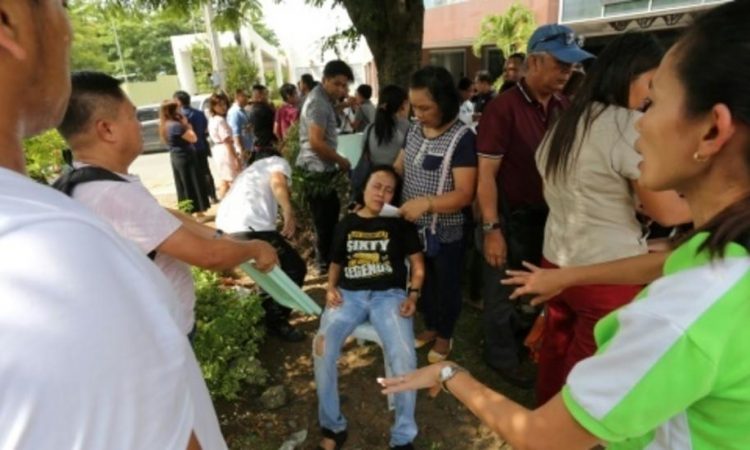 A 6.6-magnitude quake struck the southern Philippines Tuesday, geologists said, killing a boy fleeing his schoolroom, cracking buildings and injuring many in a region still reeling from a previous deadly tremor.

Terrified locals ran into the streets after the shallow quake, which hit the island of Mindanao as schools and offices opened for the day.

The shaking lasted up to a minute in some areas, damaging homes, multi-storey buildings and classrooms in a region where hundreds are still displaced by a quake that killed at least five earlier this month.

The Philippines suffers regular tremors as part of the Pacific “Ring of Fire”, an arc of intense seismic activity that stretches from Japan through Southeast Asia and across the Pacific basin.

A teenage boy was crushed by a falling wall as he tried to escape his school in Magsaysay, the town spokesman told AFP. Though other students were injured in “stampede” to escape the building, they survived.

Locals were awed by the power of the quake, which was shallow and thus potentially more destructive.

“Buildings were not just moving, they were swaying,” Gadi Sorilla, a doctor at a hospital in Tulunan, a town about 25 kilometres (15 miles) from the epicentre told AFP.

“I asked God for help,” he said, adding the hospital had quickly received about 10 patients, some with head injuries.

Local disaster authorities had received a report of a missing person, but were still working to confirm it.

Tulunan’s mayor Reuel Limbungan said the local municipal hall had been heavily damaged and authorities had received “lots of reports of injuries”.

Rescue teams have begun fanning out to assess the damage to the region, where electricity and phone services were knocked out by the power of the quake.

“It is possible to have other aftershocks which could add to the damage. People should stay outside for now,” said Renato Solidum, head of the Philippines’ seismology institute.

The US Geological Survey said the initial quake was followed by a number of smaller shakes, including one of 5.8 magnitude.

The continuing tremors were causing anxiety on the ground, with people refusing to go back inside buildings for fear of being caught in any resulting collapse.

Schools across the area have been shuttered as a precaution.

The area is still suffering the effects of a 6.4-magnitude quake that hit less than two weeks ago, killing at least five people and damaging dozens of buildings.

Residents fled homes across the Mindanao region and a mall caught fire in the city of General Santos shortly after the quake struck on October 16.

“We still have 570 individuals in evacuation centres (from the previous quake) and with this quake, we are expecting more evacuees.

One of the deadliest quakes to hit the Philippines recently was in April, provoking the collapse of a building near the capital Manila.

At least 16 people were killed when the building pancaked in the worst-hit Pampanga province.

High-rise structures in the capital swayed after the April quake, leaving some with large cracks in their walls.

Thousands of travellers were stranded after aviation authorities shut down the secondary Clark Airport, which is located on the site of the former US military installation that lies about an hour’s drive north of the capital.