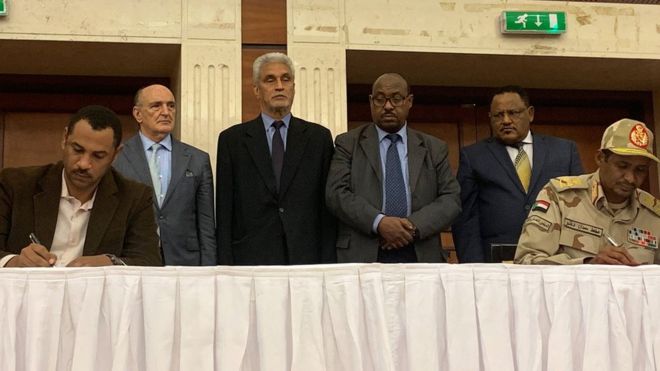 Sudan’s ruling military council and opposition leaders have signed a power-sharing accord after all-night talks.

It is a “historic moment” for the country, the deputy head of Sudan’s ruling military council, Mohamed Mohamed Hamdan “Hemeti” Dagolo, is quoted as saying by AFP news agency.

The military seized power in April after deposing Omar al-Bashir.

In clashes with the military which have turned deadly, protesters demanded the military hand power to civilians.

The signing of the document appears to confirm an agreement made in principle earlier this month.

That agreement laid out a plan rotate control of the sovereign council – the top tier of power – for just over three years.

It said the military would be in charge for the first 21 months, then a civilian-run administration would take over the following 18 months, followed by elections.

A second agreement on constitutional issues is expected to be finalised on Friday.