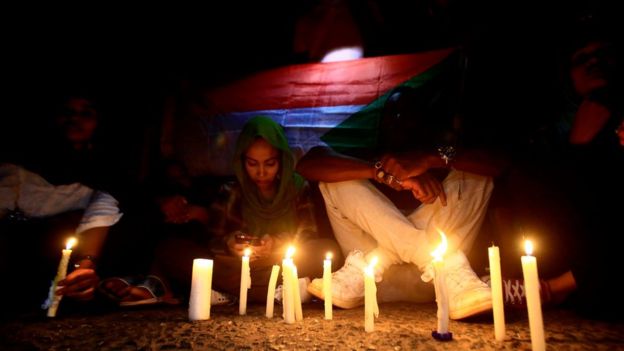 Eight senior military officers are to be charged in Sudan with crimes against humanity over their alleged part in the killing of protesters on 3 June.

Government prosecutors announced the charges after investigating the massacre, when at least 87 people died in the capital, Khartoum.

Opposition activists say the number of deaths was closer to 130.

The prosecutors’ findings did not satisfy some opposition activists, and there are reports of new protests.

Protesters were killed in June when security forces opened fire on a sit-in to demand the military hand over power.

Under a new power-sharing accord between the opposition and the military, there is supposed to be a fully independent investigation once a new government is in place.

Under Sudan’s military law, crimes against humanity can lead to the death penalty.

Fath al-Rahman Saeed, head of the committee appointed to investigate the massacre, gave the initials of those indicted for crimes against humanity, but he did not name them.

He told a news conference that three officers had violated orders by moving security forces into the area of the sit-in protest outside the defence ministry.

The security forces had, in fact, been ordered to clear a different area of the city, nicknamed Colombia, he said.

Security forces “broke the law and entered the sit-in area”, he was quoted by AFP News agency as saying. “[They] removed the barricades, fired tear gas and fired intense and random bullets that led to the killing and wounding of protesters and the burning of tents.”

The committee head also defended the decision to clear the other area, saying: “Some outlaws exploited this gathering and formed another gathering in what is known as the Colombia area, where negative and illegal practices took place.