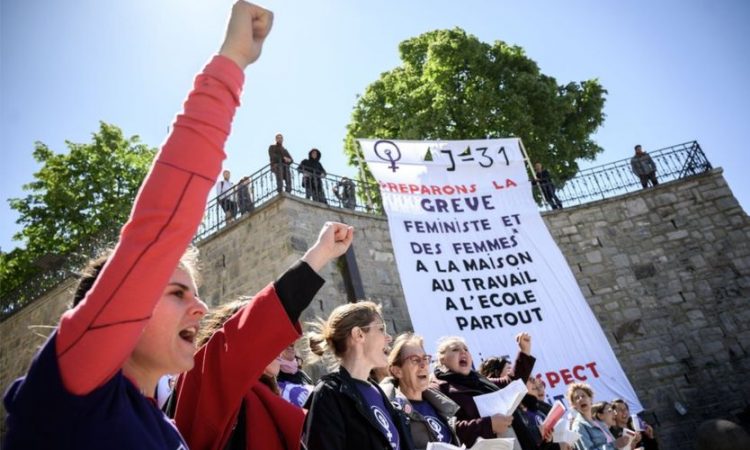 Women across Switzerland have begun a day of demonstrations against what they say is the country’s unacceptably slow pace to equality.

Friday’s protest comes 28 years after similar action saw half a million women take to the streets in 1991.

Swiss women have long campaigned to accelerate the pace of gender equality.

They joined millions of other women in Europe after World War One ended in 1918 in demanding the right to vote – but did not get it until 1971.

At the time of the 1991 strike there were no women in the Swiss government, and there was no statutory maternity leave.

Appenzell, the last Swiss canton to refuse women the right to vote, had just been ordered to change its policy by Switzerland’s Supreme Court.

Even in the 1920s women complained about the snail’s pace with which Switzerland was tackling equal rights at work
Some things have changed: there have since been eight female government ministers and the right to maternity leave is now enshrined in law.

However, women in Switzerland still earn on average 20% less than men, they are under-represented in management positions, and childcare remains not only expensive, but in short supply.

Last month, a survey by the International Labour Organisation put Switzerland bottom of the list in pay rates between men and women in senior roles.

Journalist Beatrice Born, who was six months pregnant with her first child when she joined the strike back in 1991, will be striking again on Friday.