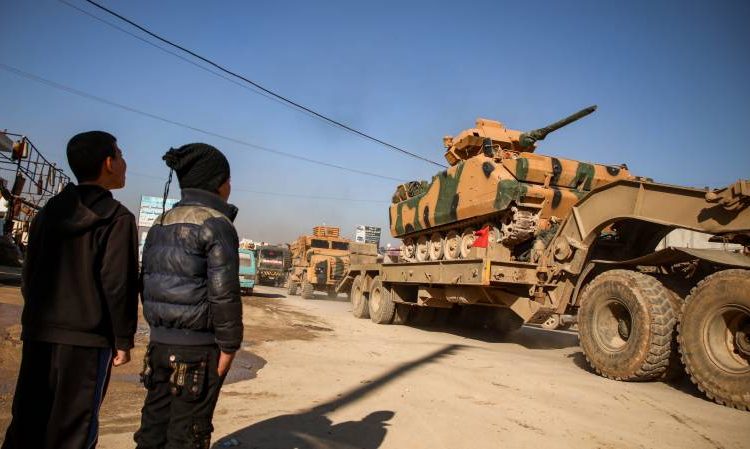 Turkey and Russia exchanged warnings on Wednesday after President Recep Tayyip Erdogan threatened an “imminent” operation in Syria to end the regime’s brutal assault on the last rebel enclave.

Syrian aid workers called urgently for a ceasefire and international help for nearly a million people fleeing the regime onslaught in the country’s northwestern Idlib province — the biggest wave of displaced civilians in the nine-year conflict.

Turkey, supporter of some rebel groups in Idlib, has been pushing for a renewed ceasefire in talks with Russia, which backs the Syrian regime. Ankara is eager to prevent another flood of refugees into its territory adding to the 3.7 million Syrians it already hosts.

The Syrian NGO Alliance said displaced people are “escaping in search of safety only to die from extreme weather conditions and lack of available resources”.

“We have hundreds and thousands of people who are fleeing… not just from bombardments but from lack of insulation, from the weather, a lack of heating. It feels like doomsday,” Razan Saffour, of the Syrian Expatriate Medical Association, told AFP at the press conference in Istanbul.

The group said a total of $336 million was needed for basic food, water and shelter. Education resources were also needed for 280 million displaced school-aged children.

Erdogan said talks with Moscow over the past fortnight had so far failed to achieve “the desired result” and warned that Turkey would launch an offensive into Syria unless Damascus pulled its forces back by the end of the month.

“An operation in Idlib is imminent… We are counting down, we are making our final warnings,” Erdogan said in a televised speech.

He called for Syrian forces to retreat behind Turkey’s military posts in Idlib, which were set up under a 2018 deal with Russia designed to hold off a regime advance.

The Kremlin quickly responded to Erdogan’s threat, warning that any operation against Syrian forces would be “the worst scenario”.

With Turkey moving large numbers of reinforcements into Idlib in recent weeks, Defence Minister Hulusi Akar emphasised that it was “out of the question for us to withdraw from our observation posts”.

“If there is any sort of attack against them, we will retaliate in kind,” he told reporters in Ankara.

Earlier this week the United Nations said the displaced were mainly women and children and warned that babies were dying of cold because aid camps are full.

The Syrian NGOs called for the warring parties to allow safe access for humanitarian groups and for a “complete ceasefire and end to human rights violations”.

The regime offensive has killed more than 400 civilians since it began in December, according to the Syrian Observatory for Human Rights.

“The violence in northwest Syria is indiscriminate. Health facilities, schools, residential areas, mosques and markets have been hit,” the UN head of humanitarian affairs and emergency relief, Mark Lowcock, said earlier this week.

The head of the World Health Organization said Tuesday that out of nearly 550 health facilities in northwest Syria, only about half were operational.

“We repeat: health facilities and health workers are not a legitimate target,” Tedros Adhanom Ghebreyesus told journalists in Geneva.

Syrian troops have reconquered swathes of Idlib and retaken the key M5 highway connecting the country’s four largest cities as well as the entire surroundings of Aleppo city for the first time since 2012.

According to the Observatory, government forces made new gains in western Aleppo province on Tuesday and were pushing towards the Sheikh Barakat mountain.

That would give them a vantage point over large parts of Idlib and Aleppo provinces, including sprawling camps housing tens of thousands of displaced people.