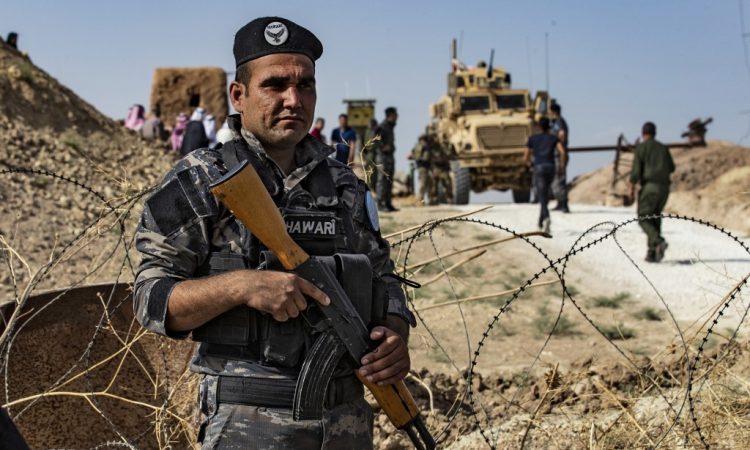 A member of Kurdish security forces stands guard during a demonstration by Syrian Kurds against Turkish threats next to a base for the US-led international coalition on the outskirts of Ras al-Ain town in Syria's Hasakeh province near the Turkish border on October 6, 2019. - US forces in Syria started pulling back today from Turkish border areas, opening the way for Ankara's threatened military invasion and heightening fears of a jihadist resurgence. (Photo by Delil SOULEIMAN / AFP)
196views

Syria’s Kurds called up civilians on Wednesday to defend against a Turkish assault feared to be imminent despite President Donald Trump’s insistence the United States has not abandoned its Kurdish allies.

Turkey said on Tuesday that it would begin its long-threatened offensive “soon”, after Trump gave what was widely seen as a green light at the weekend, ordering the pullback of US troops who had previously served as a buffer.

Trump has blown hot and cold since his surprise announcement, which drew a storm of criticism even from within his own party.

But despite the mixed messages, the Turkish government sent more troops to the border overnight.

AFP correspondents witnessed the arrival of a large convoy of vehicles in the Turkish border town of Akcakale.

The Kurdish authorities in northeastern Syria called up civilians on Wednesday in readiness for the planned assault.

“We announce three days of general mobilisation in northern and eastern Syria,” they said, urging all civilians to “head to the border with Turkey… to resist during this delicate historical moment”.

They said they would hold their erstwhile US ally and the whole international community responsible for any “humanitarian catastrophe” that unfolds.

Turkey says it wants to establish a “safe zone” on the Syrian side of the border where it could send back some of the 3.6 million refugees it hosts from the eight-year civil war.

But the Kurds say Ankara’s real goal is to dilute their demographic dominance of the northeast with an influx of mostly Sunni Arab refugees from other parts of the country now living in southwestern Turkey.

Ankara has strongly opposed Washington’s support for Kurdish forces in Syria citing their links to the outlawed Kurdistan Workers’ Party (PKK) which has fought a deadly insurgency against the Turkish state since 1984.