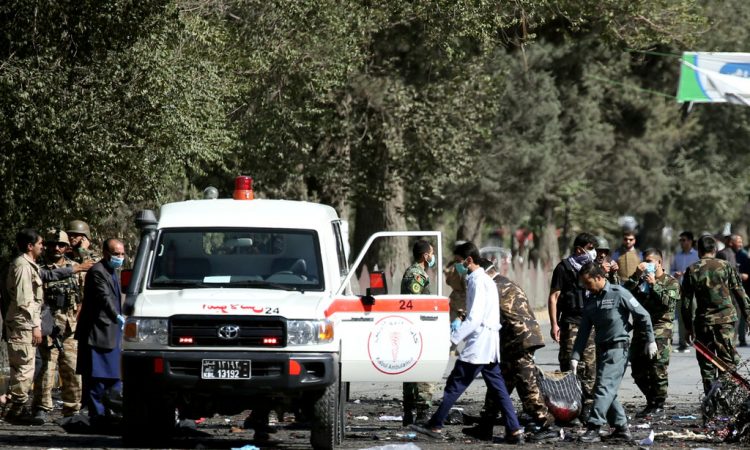 A Taliban suicide bomber killed at least 26 people and wounded dozens near a campaign rally for Afghan President Ashraf Ghani on Tuesday, with the insurgents warning of more violence ahead of elections.

About an hour after the attack, another blast also claimed by the Taliban rocked central Kabul near the US embassy.

It was not immediately clear if the second blast claimed any lives, but an AFP journalist at nearby Wazir Akbar Khan hospital saw around a dozen wounded victims, and a witness told AFP he had seen bodies in the street.

The explosions came after US President Donald Trump abruptly ended talks with the Taliban on September 10 over a deal that would have allowed the US to begin withdrawing troops from its longest war.

In a statement sent to media claiming responsibility for both blasts, Taliban spokesman Zabihullah Mujahid said the attack near Ghani’s rally was deliberately aimed at disrupting the September 28 elections.

“We already warned people not to attend election rallies, if they suffer any losses that is their own responsibility,” the statement said.

The bomber near Ghani’s rally — in Parwan province, about an hour’s drive north of Kabul — had been on a motorbike and had detonated his device at a checkpoint leading to the event, according to interior ministry spokesman Nasrat Rahimi.

An AFP image from the scene showed the remains of a burnt motorcycle, with a body on top covered by a blanket, next to a badly damaged police car.

Women and children were among the causalities, Parwan hospital director Abdul Qasim Sangin told AFP, adding 42 people were injured as well as the 26 dead.

The president, who was speaking to his supporters at the time of the blast, was unhurt but later condemned the attack, saying the incident proved the Taliban had no real interest in reconciliation.

“As the Taliban continue their crimes, they once again prove that they are not interested in peace and stability in Afghanistan,” said Ghani in a statement.

Sixty kilometres (40 miles) away in Kabul, a shopkeeper, Rahimullah, said he had been sitting inside his shop when the second blast came.