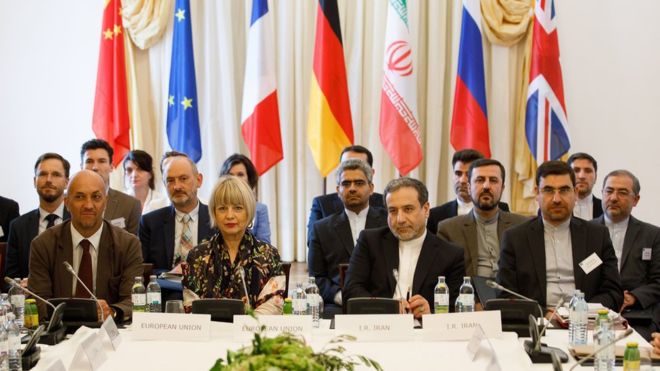 Talks to try to save the Iran nuclear deal have been held amid rising tensions over tankers in the Gulf.

After meeting officials from Britain, France, Germany, Russia and China in Vienna, a senior Iranian official said the atmosphere had been “constructive”.

Tensions have soared since the United States withdrew from the 2015 accord last year and reimposed sanctions.

In recent weeks, Iran and Britain have seized a tanker each – putting further pressure on the 2015 accord.

The aim of the emergency talks was to ease recent tensions, and keep the 2015 agreement, officially known as the Joint Comprehensive Plan of Action (JCPOA), alive.

Earlier this month, the UK, French and German leaders had issued a joint statement saying they were “deeply troubled” by events in the Gulf, and said it was “time to act responsibly and seek a path to stop the escalation of tensions and resume dialogue”.

Arriving at the meeting, Iran’s Deputy Foreign Minister Abbas Araghchi said he considered the seizing of its oil tanker in breach of the JCPOA, and Iran also described as “provocative” British proposals for a European-led mission to escort tankers through the Strait of Hormuz, a vital international shipping route.

Mr Araghchi said after the meeting: “The atmosphere was constructive. Discussions were good. I cannot say that we resolved everything, I can say there are lots of commitments.”

China’s representative Fu Cong said all parties had “expressed their commitment to safeguard the JCPOA and… expressed their strong opposition against the US unilateral imposition of sanctions.”