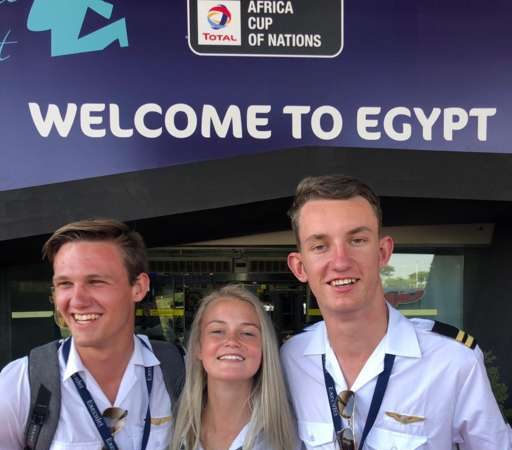 An aircraft built by South African teenagers has successfully been flown from Cape Town to Cairo.

The 17-year-old founder of the project, Megan Werner, was overjoyed after landing in Cairo.

“I really can’t believe we’ve done it,” she said.

She encountered a massive hurdle on their very last stop:

“When we landed in Egypt the authorities wanted to arrest us, take our passports and licences but luckily after about four hours, everything was sorted out and we got some more fuel and carried on to Aswan.”

Her father, Des Werner, a qualified commercial pilot, explained what had happened:

“Megan and Driaan [van den Heever, the safety pilot] encountered a problem with one of their avionic systems about an hour into Egyptian airspace so they decided it would be better to land at the closest domestic airport in Cairo instead of the international airport as planned – so that created a little chaos.”

Her dad was flying the support aircraft but that plane started leaking after stopping in Ethiopia, so the teenagers went on alone.

“Driaan and I flew alone for ten hours without the support aircraft, so it was two teenagers, all by ourselves with no support.”

The team’s first stop was in the southern Namibian coastal town of Luderitz. The plane has a six-and-a-half hour flying range and other stops on the way to Egypt were in Zimbabwe, Malawi, Tanzania, Kenya, Ethiopia and Eritrea.

They will take a different route on the return journey that will include stops in Uganda, Rwanda, Zambia and Botswana.