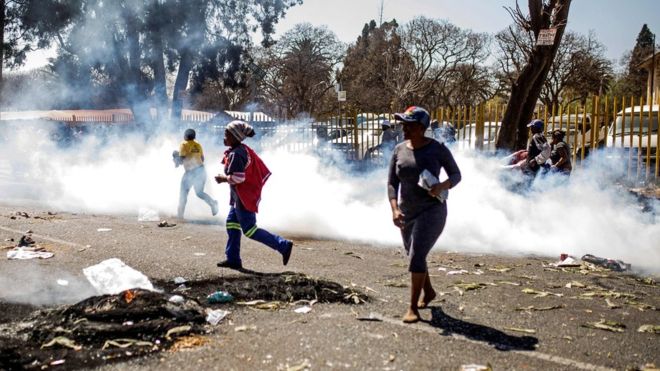 Tensions eased between twin African powerhouses South Africa and Nigeria on Thursday after Pretoria temporarily closed its diplomatic missions in the rival state following a wave of attacks on foreign-owned stores there that claimed 10 lives.

“Nigeria does not seek an escalation of the ongoing situation,” a senior aide to Nigeria’s President Muhammadu Buhari told reporters on condition of anonymity.

“We will work with South Africa to find solutions to their problems which have become our own problem. We will work as brothers,” the aide said.

South African President Cyril Ramaphosa said earlier Thursday that at least 10 people were killed including one foreign national, while dozens of shops were destroyed in xenophobic violence in and around Johannesburg this week, triggering angry demonstrations in several African countries.

Foreign workers often face anti-immigrant sentiment in South Africa, where they compete against locals for jobs, particularly in low-skilled industries.

“No amount of anger and frustration and grievance can justify such acts of wanton destruction and criminality,” Ramaphosa said.

“Equally, there is no justification for the looting and destruction of businesses owned by South Africans,” he said.

Other African nations have appealed for calm, urging their nationals in South Africa to exercise caution.

Nigeria, the source of many of the workers in South Africa, has stepped up security after apparent reprisal attacks, while violence also flared in the Democratic Republic of Congo on Thursday.

In Nigeria, South Africa’s embassy in the capital Abuja and consulate in the economic hub of Lagos were shut on Wednesday.

And in another outbreak on Thursday, angry crowds in DR Congo’s second largest city Lubumbashi smashed the windows of the South African consulate and looted South African-owned stores.

Meanwhile, Madagascar’s national football team called off a friendly match with South Africa this weekend because of security concerns.

It was the second time South Africa’s Bafana Bafana were cancelled on this week after Zambia turned down a match on Wednesday for similar reasons.