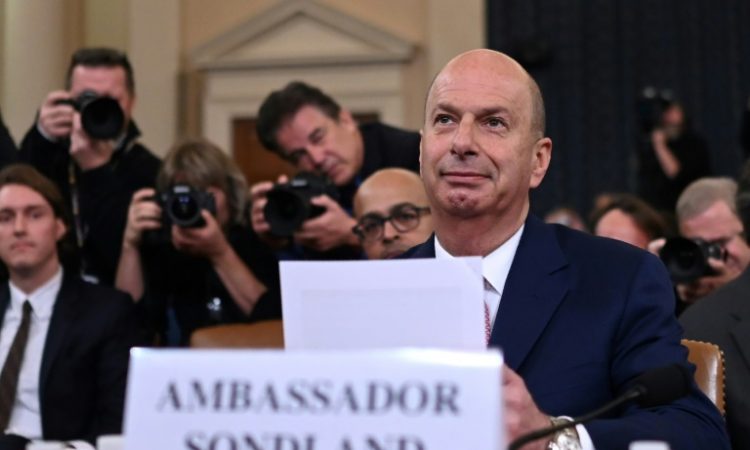 A senior US diplomat directly implicated President Donald Trump Wednesday in a scheme to force Ukraine to probe a political rival, in bombshell testimony to a televised impeachment hearing.

Gordon Sondland, the ambassador to the European Union, told lawmakers he followed the president’s orders in seeking a “quid pro quo” deal for Ukraine to investigate Democrat Joe Biden in exchange for a White House summit.

Sondland said Trump’s personal lawyer Rudy Giuliani led the effort at Trump’s direction to pressure Ukraine President Volodymr Zelensky for the investigation and that top officials in the White House and State Department knew about it.

The unexpectedly damning testimony drew a sharp backlash from Trump who tweeted: “This Witch Hunt must end NOW. So bad for our Country!”.

Trump said he barely knew Sondland and had not spoken to him much, despite the senior diplomat having donated $1 million to his inauguration and testifying that he had spoken to the president some 20 times while ambassador.

Democrats said Sondland’s seven hours of testimony before the House Intelligence Committee had bolstered their case for Trump’s impeachment for what they have labeled “extortion”.

“Today’s testimony is among the most significant evidence to date,” said committee chairman Adam Schiff.

“It goes right to the heart of the issue of bribery as well as other potential high crimes or misdemeanors.”

A succession of Democrats hoping to win the nomination to take on Trump in next year’s election also said the testimony had strengthened the case for impeachment as the issue dominated the opening exchanges in their latest televised primary debate.

Sondland said Trump directed him and two other senior diplomats to work with Giuliani.

From early in the year, Giuliani mounted a pressure campaign on Zelensky’s government to investigate Biden over his son Hunter’s ties to a Ukrainian energy company, Burisma, and to probe a conspiracy theory espoused by Trump that Ukraine helped Democrats against him in 2016.

Biden is one of the favorites to challenge Trump in next year’s presidential election.

“Mr. Giuliani demanded that Ukraine make a public statement announcing the investigations of the 2016 election/DNC server and Burisma,” Sondland told the panel.

Far from being a “rogue” operation outside normal US diplomatic channels, Sondland told the hearing top officials — including Vice President Mike Pence and Secretary of State Mike Pompeo — were kept constantly informed.

“We followed the president’s orders,” he said.

He had not implicated the president in earlier private testimony, when he answered scores of questions by saying he could “not remember”.

But subsequent testimony by other witnesses which had further implicated him in the Ukraine pressure scheme had jolted his memory, he said on Wednesday.

While he confirmed the linkage between the investigations and a White House meeting between Zelensky and Trump, he would not attest to allegations that Trump froze $391 million in aid as well to Ukraine to add pressure on Ukraine.

“I never heard from President Trump that aid was conditioned on an announcement” of the investigations, he said, contradicting testimony from two other diplomats.

In separate testimony, a Pentagon official appeared to undermine a key Republican defense in the impeachment battle, that Kiev did not even know until late August or even September about the July 18 aid freeze, rendering moot Democrats’ allegations that Trump had extorted Ukraine.

Laura Cooper, the Pentagon official in charge of Ukraine affairs, said Kiev voiced concern over a holdup in aid on July 25.

That was the same day that Trump told Zelensky in a phone call that he wanted a favor, asking for investigations into Biden specifically and the 2016 conspiracy theory.

“The Ukrainian embassy staff asked, ‘What is going on with Ukrainian security assistance?” she told the committee.

At the White House, Trump denied making the demand of Zelensky, citing Sondland’s own recall of their September 9 phone call on the Ukraine issue.

“If this were a prizefight, they’d stop it!” he said of the inquiry.

Speaking at the Democrats’ debate, Biden dodged a question on the role of his son but said the testimony had shown that “Donald Trump doesn’t want me to be the nominee.”

And Bernie Sanders, another of the frontrunners for the nomination, said Trump had been shown to be “not only a pathological liar” but also “the most corrupt president in the modern history of America”.