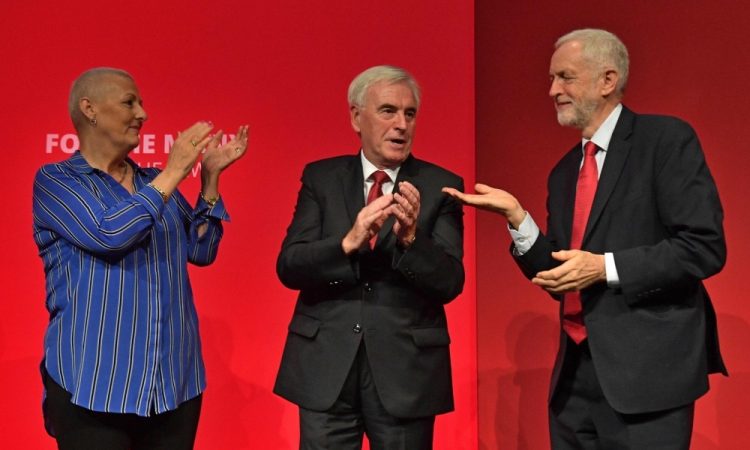 Britain’s main opposition Labour Party was set Monday to decide on a new Brexit strategy at a fractious conference that has piled pressure on leader Jeremy Corbyn to openly campaign to remain in the European Union.

Labour’s identity crisis is being played out as Britain speeds toward a potentially chaotic “no-deal” departure from the EU on October 31 and a likely general election.

Opinion polls show Corbyn’s efforts to unite both the pro- and anti-Brexit wings of his party by either delaying a decision on departure or leaving it in voters’ hands have led to a dramatic drop in support.

Grass roots activists spent hours deep into Sunday night trying to come up with a single Brexit motion that could be put up for a vote at the conference on Monday.

They ended up with three.

One motion backed by regional party branches says Labour “must reflect the overwhelming view of its members and voters, who want to stay in the EU.

“Labour will therefore campaign energetically for a public vote and to stay in the EU in the referendum, while recognising the rights of those who want to argue another view.”

A dissenting proposal backed by the big unions offers “a public vote on a deal agreed with the EU giving people a final say between a credible leave option and remain”.

It would not see Labour officially campaign for either option and instead try to “build maximum consensus”.

The third motion, proposed by Corbyn himself and backed by the executive, would see the party come to some sort of decision “through a special one-day conference, following the election of a Labour government”.

Top members of Corbyn’s shadow government insist that they are members of a fundamentally European party with an obligation to get the 2016 Brexit referendum results reversed.

“We must not just campaign to remain but we must lead the campaign to remain,” Labour’s foreign affairs spokeswoman Emily Thornberry said on the sidelines of the conference in the south coast resort of Brighton.

But unions and a powerful leftist lobby that helped Corbyn become Labour leader in 2015 want the party to embrace its working-class base which backs Britain charting its own course.

Unite union boss Len McCluskey said dissenting voices such as Thornberry’s meant Labour was facing “a tough fight against those without and those within our party”.